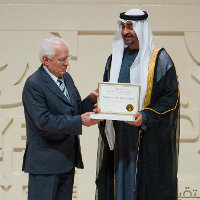 Goldemberg is a world-renowned energy expert who is widely recognized as a pioneer in energy transformation, efficiency improvement and clean energy sources. He began studying energy problems in the 1960s, and in the 1970s, he was pivotal in formulating and promoting the use of bio-ethanol in Brazil, transforming the country’s economy. In the 1980s, Goldemberg pioneered a new energy strategy for global sustainable development, and introduced the concept of technological leapfrogging, by which developing countries could implement renewable energy for sustainable development.

Goldemberg has worked closely with IIASA for years, most recently as the Co-President of the Global Energy Assessment (GEA)—the first ever fully integrated energy assessment that analyzes energy challenges, opportunities and strategies, for developing, industrialized and emerging economies.

Over the years, Goldemberg has held a number of high-level positions, including Rector of the University of São Paulo, Federal Secretary of Science and Technology, and Minister of Education. In 1992, Goldemberg served as the interim Brazilian Federal Secretary of Environment, and as such was one of Brazil's highest-level representatives at the "Earth Summit" in Rio. Later, he served as the Secretary of Environment in São Paulo, Brazil's most populous state and largest producer of biofuels.

The new award is only one of a number of distinctions that Goldemberg has received over the years for his innovative work. In 2008 he won the prestigious Blue Planet Prize and in 2010 the Ernesto Illy Trieste Science Prize.