Impact Sheet #20, August 2021. IIASA and partners in East Africa are studying how the region’s economic development could affect water resources. 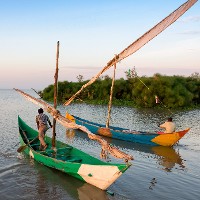 The partnership has allowed us to tap into the institute’s wealth of experience and expertise. It brought clarity with regard to competing water uses and associated challenges. The results of the research work are helping us to make science-based decisions about water policy and management.

Collaborating with IIASA has helped Ugandan water policy to think beyond now to the next ten to thirty years, to think beyond Uganda to take a transboundary perspective, and to think beyond the water sector to consider the environment, the energy sector, the economy, and more.

CALLIST TINDIMUGAYA, COMMISSIONER FOR WATER RESOURCES PLANNING AND REGULATION AT THE MINISTRY OF WATER AND ENVIRONMENT UGANDA.

The Lake Victoria basin holds freshwater resources that are vital for East Africa and the entire Nile Basin. Rapid population and economic growth are however putting pressure on water supplies. The region is also vulnerable to climate change. Increasing climate variability may cause seasonal shifts in precipitation, and higher risk of flooding and drought. So could water scarcity constrain the development that East Africa needs?

This region faces persistent poverty, economic inequality, rising unemployment, poor infrastructure, and insufficient energy supply. In part to address these issues, the East African Community (EAC) was founded in 2000 by states surrounding Lake Victoria, aiming to improve quality of life for the people of East Africa. In 2015, they published the EAC2050 vision, a plan that sees the community developing to become middle-income countries.

In partnership with the LVBC, IIASA has now modeled future water use and supply in the basin, in the first regional case study of the IIASA Water Futures and Solutions Initiative (see box). The study looked at two scenarios. A reference scenario, with social, economic, and technological trends staying close to historical patterns, was compared with the regional vision scenario, with more rapid development, based on the EAC2050 vision and fleshed out through stakeholder workshops in 2017 and 2018.

These scenarios were fed into an integrated modeling framework. The Community Water Model (CWatM) calculates the physical flow of water through rivers, lakes, and soil, based on projected climate, land cover, topography, and other biophysical parameters. It also calculates water demand, based on population, economic growth, methods of agriculture, and other socioeconomic factors, as well as the amount of water required for healthy freshwater ecosystems. The outputs of CWatM, along with data on available infrastructure such as reservoirs, go into the IIASA Global Hydro-economic Model (ECHO). This calculates the lowest-cost water management system, from options including groundwater pumping, reuse of treated wastewater, and surface-water diversion (such as irrigation channels).

The results show a fairly strong contrast in demand. The reference scenario has a higher population, and therefore higher water demand for domestic use, but the overall demand in the vision scenario is substantially higher (see Figure 1). That is because the vision scenario includes far more irrigation, a stated EAC vision policy to protect against increasing rainfall variability, which increases demand despite some improvements in agricultural efficiency. 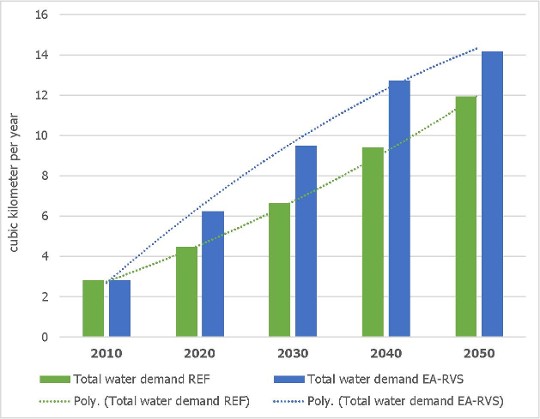 So can this extra demand be met? According to one measure of water scarcity, yes. The water extraction index is the ratio of actual water withdrawn to total available supply. It stands at just 4.4% today, and the models project it rising to 25% in the reference scenario, and 30% in the vision scenario. That is considered a state of water scarcity (defined as an extraction index of 20 to 40%), but not severe scarcity (above 40%). In part, this is because land-use change makes more surface water available: residential areas and farmland have more runoff than the natural vegetation and forests they replace, so a higher fraction of rainfall is available downstream. This headline result of the models is good news for development plans. Even the ambitious vision of the EAC should be achievable with available water resources. However, further expansion in demand could be more problematic, and uncertainties in climate change projections could mean even more pressure on freshwater systems.

The study raises concerns over two other aspects of water availability. The first of these is local scarcity. The project looked at 61 sub-basins, helping policymakers to look at regional disparities and balance local water demand. A few of these sub-basins – mainly densely populated areas around the southeast of Lake Victoria – are projected to face severe water scarcity in 2050 (see Figure 2). It is also possible that land-use change will lead to local water scarcity on finer scales, but more detailed hydrological modeling would be needed to establish that.

The second concern is economic water scarcity. The per-capita water resources of the area are less than 500 cubic meters per person per year when measured across the whole basin, but only a small fraction of this is actually being extracted, probably because the region is too poor to invest in sufficient water infrastructure. Both future scenarios include more expensive extraction and water use technologies as demand rises, which could make economic water scarcity worse.

The study’s results were published in 2019 in a report titled, East Africa Future Water Scenarios to 2050, and as a peer-reviewed publication in One Earth in March 2021. This has been an aid to policymakers across the region, informing several new projects, such as the Integrated Water Resources Management Program for the Lake Victoria Basin.

“The study showed the value of involving stakeholders in analyzing challenges and finding solutions,” says Callist Tindimugaya, Commissioner for Water Resources Planning and Regulation at the Ministry of Water and Environment, Uganda. “The ministry has already adopted such an approach for Uganda’s catchment planning process. The project also helped us build trust between our neighboring countries in the Lake Victoria Basin. It showed the value of sharing data and for countries to work together to solve our joint water challenges. After all, 98% of water resources in Uganda are shared with other countries.”

The study helps to provide a basis for deciding how much water to release from Lake Victoria. As the lake feeds the Nile, countries downstream – Egypt, Sudan, and South Sudan – all have a strong interest in water flow being maintained. The headline result of the study should be reassuring, as development to 2050 is unlikely to restrict water flow into the Nile, although that is subject to large uncertainties in climate change projections.

While the study concentrated on the quantity of water, an equally important dimension is quality. Increasing agricultural production could cause eutrophication in the lake, damaging the world’s largest freshwater fishery. A planned IIASA project will look at water quality, in collaboration with the Ugandan Ministry of Water and Environment.

Because agriculture was shown to be the main driver of water demand, IIASA and various stakeholders have set up a project, called scaleWAYS, looking at how to intensify rice and fodder production in a resilient and sustainable way.

Figure 2. Areas that could face severe water scarcity in 2050 cluster around the densely populated southern shore of Lake Victoria. Maps show the projected water exploitation index (the ratio of demand to availability) for 61 sub-basins in the vision scenario; left for annual demand and availability, right for July only. Source: IIASA WFaS East Africa (CWatM-ECHO model system)

“It has sensitized Ugandan policymakers on the potential to scale up production of fodder and rice through irrigation, and the need for the irrigation to be efficient and sustainable,” says Prossie Nakawuka, a researcher and lecturer at the Department of Agricultural and Biosystems Engineering at Makerere University in Uganda.

A scaleWAYS workshop held in Entebbe in March 2020 established a community of practice (CoP) to bring together farmers, policymakers, industry, and academia to better understand the problems farmers are facing and to jointly, through discussions and interactions, find solutions that will have a good impact for all.

It is hoped that the CoP will be a think-tank for various policy organs in East Africa, to ensure that water policy is informed by science.

Launched in 2012, the Water Futures and Solutions Initiative (WFaS) is a collaborative IIASA project to study sustainable water solutions.

Using integrated socioeconomic and hydrological models, WFaS examines possible futures, and tests the feasibility, sustainability, and robustness of policies and management options. Partners include UNESCO, the Organisation for Economic Co-operation and Development (OECD), and the World Water Council. They use WFaS to incorporate water science into water policy and planning.