Impact Sheet #1, November 2014. Arctic temperatures have risen at twice the global average rate over the last 40 years. In recent years, concerns arose that the warming from short-lived climate forcers (SLCFs), like methane, tropospheric ozone, and especially black carbon, might be greater than that of CO2. In 2009 the intergovernmental Arctic Council asked IIASA to investigate the effects of SLCFs in the Arctic using its Greenhouse gas – Air pollution Interactions and Synergies (GAINS) model. 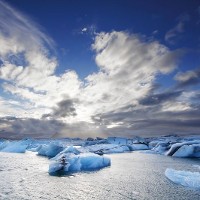 Atmospheric black carbon or soot affects climate via a number of pathways. Black carbon deposits on snow and ice darken the surface, which causes it to absorb more solar radiation and accelerates melting. Black carbon is also a component of particulate matter, which has adverse human health effects. Unlike long-lived CO2, black carbon, one of the biggest contributors to global warming, remains for just days to weeks in the atmosphere. Reduction of pollutants like black carbon represents a tangible policy option for near-term climate change mitigation.

IIASA coauthored a draft White Paper “Current Policies, Emission Trends and Mitigation Options for Black Carbon in the Arctic Region” for the Arctic Council’s ministerial
meeting in 2009. Subsequently the Arctic Council established a Task Force to examine more deeply the role and mitigation potential of SLCFs in the Arctic. Its key message was that simultaneously and immediately reducing black carbon and methane emissions can help
slow the pace of Arctic warming over the next few decades.

The White Paper showed that while some black carbon is produced in the Arctic itself, for example, by shipping, most is fall-out from the eight Arctic Council nations and the near-Arctic regions north of latitude 40, which includes much of the EU, Russia, Ukraine, China (north of
Beijing), Canada, and part of the USA. Burning diesel fuel, agricultural burning, wildfires, and residential combustion of solid fuels account for most black carbon that reaches the Arctic.