It was Professor Sten Nilsson of IIASA’s Forest Study who first drew attention to the impact of pollution on Europe's forest resources, advocating the formulation of a convention on forest decline in Europe. 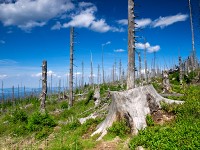 His recommendation came in response to growing concern about damage to European forests attributed to air pollution and as a result of intensive collaboration between IIASA’s Transboundary Air Pollution Project and the Forest Study in efforts to quantify the problem.

Excess deposition of acids and exposure to atmospheric pollutants will damage trees of different types and ages, resulting in leaf and needle loss. Because the health of a tree
affects its growth rate, and both this and life expectancy affect the value and timing of
harvests, these calculations were important for forest industries, as well as from an ecological perspective.

Despite the current agreements on reducing emissions levels, the area of forest likely
to be affected by excess sulfur deposition in the future was unlikely to change, according to IIASA scientists, unless planned expenditures on emission control were increased or reallocated. Moreover, the work revealed that many of the areas likely to suffer from excess sulfur deposition would also experience excess nitrogen deposition and troubling levels of atmospheric ozone. This implied that many trees would suffer the effects of multiple pollutants.

From RAINS to GAINS