Impact Sheet #14, February 2017. IIASA played a significant role in bringing under control toxic air pollutants that damage human health and the environment. The Regional Acidification Information and Simulation (RAINS) model, developed at IIASA, was at the center of international environmental negotiations to achieve cleaner air in Europe at lowest cost. 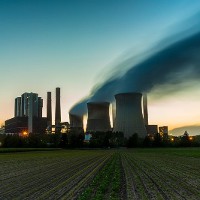 By the 1970s acid rain caused by sulfur dioxide (SO2) and nitrogen oxide (NOx) pollution from energy generation, industrial sources, motor vehicles, and agriculture, was causing severe damage to the European environment. Prevailing winds transported pollution across national borders so that low-polluting countries experienced more than their fair share of pollution “fall-out.”

Instruments to combat transboundary pollution were needed at an international level. When negotiating a new treaty in 1979, policymakers and scientists understood that making uniform cuts in emissions across countries would not be efficient or effective. Getting states to negotiate a consensus on cutting emissions would also require tactical diplomacy and scientific proof. The IIASA interactive RAINS model provided both. Non-technical negotiating teams were quickly trained to interrogate RAINS about the costs and impacts of suggested measures to ensure that negotiations were fair.

Negotiations resulted in the 1979 Convention on Long-range Transboundary Air Pollution (LRTAP), which entered into force in 1983. This framework convention, proposed by the UN Economic Council for Europe (UNECE), is one of the oldest and most successful international treaties protecting the environment.

IIASA was appointed the Centre for Integrated Assessment Modelling (CIAM) of the 1999 Protocol to the LRTAP, The Gothenburg Protocol to Abate Acidification, Eutrophication and Groundlevel Ozone, which entered into force in 2005. This “multi-effect, multipollutant” protocol aimed to control four substances, SO2, NOx, ammonia, and volatile organic compounds, by 2010 and provided international emission ceilings that achieved negotiators’ goals in a cost-effective manner. The RAINS model, in “optimization” mode, was also used during negotiations for the 1994 Oslo Protocol on Further Reduction of Sulphur Emissions.