Former US NMO secretary and IIASA alumnus Alan McDonald honors the memory of Professor Francis Bator, who passed on 15 March and was instrumental in the creation of IIASA during his role as the deputy national security advisor to President Lyndon Johnson and in transition of US membership in 1982. 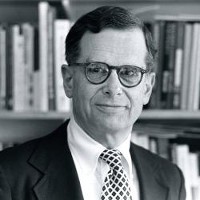 In memory of Francis Bator
by Alan McDonald

Francis was instrumental in IIASA's creation and in the preservation of US membership in 1982.

In 1998, I described Francis's involvement in IIASA's creation as follows.[1]

“On June 15 [1966] President Johnson was due to address a delegation of visiting Austrian businessmen in the Rose Garden. Francis Bator, Deputy Special Assistant to the President for National Security Affairs, suggested the occasion be used to propose new bridge-building initiatives, including "an East-West Institute of Management and Administration." Johnson's reaction was positive; Secretary of State Dean Rusk's was not. Rusk was concerned that such an initiative would undercut the U.S. policy of non-recognition of East Germany. He wished to consult first with Western allies through a discussion in the NATO Council and turn the idea into an international Western proposal. Johnson chose postponement. If Rusk was deeply persuaded that proposing an East-West Institute was not wise, Johnson would do the speech without bridge-building proposals.

“By July 8, there was another National Security Action Memorandum, NSAM 352, and its subject was specifically "bridge-building." It began,

The President has instructed that-in consultation with our allies we actively develop areas of peaceful cooperation with the nations of Eastern Europe and the Soviet Union. He has asked the Secretary of State to examine and propose to him specific actions the Government might take. These actions will be designed to help create an environment in which peaceful settlement of the division of Germany and of Europe will become possible.

“NSAM 352 set in motion an effort culminating in President Johnson's October 7, 1966 speech to the National Conference of Editorial Writers. In what became known as the "bridge-building speech," Johnson announced seven new initiatives and reaffirmed two already in train, but the list still did not include the East-West Institute. On November 30 Bator sent a memo to Johnson in which he recalled the history of the East-West proposal, Johnson's favorable reaction, the decision to hold off until NATO colleagues were consulted, and the absence of action since, concluding,

... if you are still favorably disposed, I recommend that we do a quick NATO check and go ahead with an announcement, perhaps next week... If you want him to take this on, Mac [Bundy] would be ready and willing... We would not want to nail down the specifics at the outset; it would offend both our friends and the Eastern Europeans. Bundy's job would be to conduct a real consultation, not a hard sell. However, those of us who have worked on the idea have in mind an institution based on the proposition that all advanced economies —capitalist, socialist, communist — share the problem of efficiently managing large  programs and enterprises: factories and cities, subway systems and air traffic, hospitals and water pollution. There is great demand-in Russia and Yugoslavia as well as the UK and Germany-for the new techniques of management designed to cope with these problems.

“Johnson approved, with instructions to clear it with Rusk, and then go ahead as proposed. Johnson himself would call McGeorge Bundy, who had earlier been Johnson's Special Assistant for International Security Affairs and was now the president of the Ford Foundation. Bundy's appointment was made public on December 15, 1966, but Ambassador Llewellyn Thompson alerted the Soviets prior to the announcement to improve the likelihood of a favorable reaction.”

In the 1980s, Francis was a major player in moving the US membership from the National Academy of Sciences (NAS) in Washington, DC, to the American Academy of Arts and Sciences in Cambridge, MA, after President Reagan’s Science Advisor George Keyworth had effectively instructed the NAS to cease its membership. I met Francis in the fall of 1982 in the midst of the transfer when I was hired as the staff guy at the American Academy. Francis, Howard Raiffa, Harvey Brooks, Carl Kaysen, and John Voss, all Fellows of the American Academy, are the principals that I remember saving the US membership, at least on the American Academy’s end. (There were lots of other important players such as Roger Levien, Chet Cooper, Buzz Holling, and Keith Glennan.) I’m pretty sure Francis was a member of the American Academy's US Committee for IIASA for a number of years, and, when I later wrote the paper quoted above, he sat for I think 2 interviews and gave me access to lots of documents about IIASA’s beginnings (including the Nov. 30, 1966 decision memo for LBJ) that I believe are now in the LBJ Library.

IIASA has been a success and thus has many fathers. Francis was definitely one of them.

[1] “Scientific Cooperation as a Bridge Across the Cold War Divide: The Case of the International Institute for Applied Systems Analysis,” Annals of the New York Academy of Sciences, Vol. 866, Dec. 30, 1998, pp. 55-83; also reprinted as IIASA RR-99-6.

Scientific Cooperation as a Bridge Across the Cold War Divide: The Case of the International Institute for Applied Systems Analysis (IIASA)