Dr. Margaret Goud Collins drew on long IIASA experience to convene a session at the American Geophysical Union (AGU) 2018 fall meeting in Washington, D.C. last week. Here she gives a personal account of how IIASA was showcased at the meeting. 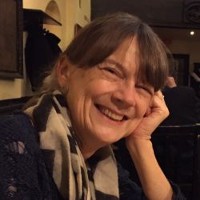 "The AGU fall meeting in 2018 offered an exceptional chance to raise IIASA’s profile in the US: the meeting brought over 25,000 members of the geoscience community to Washington, many of them working in the fields where IIASA is strong. With Albert van Jaarsveld only 2 months into his tenure as the new IIASA Director General, it was a great time to kick off his introduction to the IIASA network in the US and to offer him a window into some of IIASA’s existing and potential connections with US researchers, institutions, and decision makers.

The AGU meeting was full of IIASA staff and alumni – more than 100 papers and sessions featured IIASA staff, alumni, and collaborators as presenters and organizers. The timing of the meeting coincided with the YSSP 2019 application season (which ends on 11 January), and the fact that 8 YSSPers from 2018 were presenting results from their summer at IIASA made it easy to argue the YSSP case! Some of the highlights of IIASA at AGU are featured on the IIASA Website.

I was particularly excited about a Union Session on Friday morning, Geoscience Impact in a Complex World: Successful Collaboration with Social Scientists, which I organized in collaboration with colleagues at IIASA and the University of Maryland National Socio-Environmental Synthesis Center (SESYNC). Moderated by SESYNC Director Margaret Palmer, the session brought together a diverse panel of leaders, working in organizations that aim at bridging the divide between societally relevant research and real change in people’s lives.  IIASA was represented by Dr. van Jaarsveld, and the other 7 speakers included National Academy of Sciences (NAS) President Marcia McNutt and 3 former YSSPers: Barry Gold (YSSP 1985, now at Walton Family Foundation), Brian O’Neill (YSSP 1997, now Director of Research at the University of Denver Pardee Center for International Futures), and Holmes Hummel (YSSP 2005, now founder of energy financing NGO Clean Energy Works). The discussion, fascinating and wide-ranging, will be summarized in one or more publications in the science policy literature. However, the session was live streamed, and is still available online. To see the presentations, and the insights captured in the lively discussion among the panelists, register on AGU GO, then login to the AGU Fall Meeting site and find the link to Session U52A.

The Friends of IIASA got together with the IIASA U.S. National Committee at the NAS to organize a reception to welcome IIASA’s new Director General. Over 60 members of the IIASA community came to meet Dr. van Jaarsveld at the NAS Keck Center on Thursday evening – including 3 former IIASA Directors, lots of YSSP alumni, and collaborators from academia, government agencies, and NGOs. 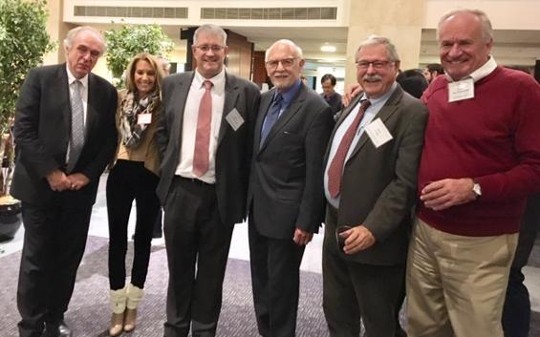 It was an auspicious beginning to this new era at IIASA. Albert’s enthusiasm for IIASA pervaded every aspect of his visit – and those of us who work with Friends of IIASA were especially heartened to see the emphasis he places on the importance of the global IIASA network of alumni, collaborators, and friends. The AGU meeting offered a great display of what a well-placed and well-connected network it is."

Dr. Goud Collins serves as the Executive Director of the Friends of IIASA, an American nonprofit aimed at supporting IIASA’s research and training goals through fundraising and network building in the U.S. She also serves on the U.S. NMO Committee for IIASA. A geological oceanographer by training, she has been working at the science-policy interface for over 4 decades. Maggie has been associated with IIASA since 1997, serving as the Program Director for the U.S. NMO Committee from 1997-2012, and at IIASA as Secretary for Science and NMOs (2012-2015) and Program Director for Capacity Development and Academic Training (2015).