Luis J. Castro returned to IIASA in February and March to re-visit the models he worked on at IIASA from 1977-1982. Below he shares with us his professional experience over the last 40 years. 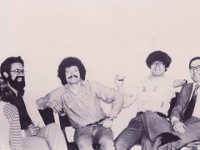 It's nice to see the research I did at IIASA 40 years ago being applied worldwide todayby Luis J. Castro

Important events took place that created the opportunity for me to come back to IIASA and work on a specific aspect in relation to my research. At the end of October beginning of November of 2015, an IIASA delegation visited Mexico. IIASA Director General and CEO Dr. Pavel Kabat invited me to give a presentation to the Mexican National Member Organization INEGI (Instituto Nacional de Estadística y Geografía). As this Institute deals mainly with demography and statistics, I focused on the demographic research that I participated in at IIASA from 1977-1982. These methods and tools have been used for UN population projections, as well as by many individual countries around the world. Migration issues are becoming a growing priority for policy, and there is still much research to be done to help us understand the complex dynamics of migration.

During these two months at IIASA (February - March 2016), I focused my research on three issues. The first demonstrates that the migration models developed when I was first at IIASA can be applied to international migration assumptions in terms of methodology. The second concerns migration assumptions for the Shared Socioeconomic Pathways (SSPs). And the third aspect is related to the work of the IIASA Sustainability NEXUS Research Cluster, specifically relating to a project involving a case study in a region covering India, Pakistan and Afghanistan regarding water governance.

I first arrived at IIASA in 1977 when I was 29 years old; Mexico was not a National Member Organization. Andrei Rogers, my PhD supervisor from Northwestern University, invited me along with two other former students to join him in the Human Settlement and Services Program as we knew the methodology in terms of population, distribution and migrations. Initially my research activities started with my undergraduate in hydrology research at the Engineering Institute of the National University of Mexico City in 1968.

I came for one year to IIASA and stayed for five with several publications from our work. I was here with my wife Cristina and 1.5 year-old son Rodrigo. Then after two years my second son Bernardo was born. They were very young during our time in Austria. During my fourth year at IIASA, I gave a presentation of my work at an international conference, and afterwards the Director of the Population Division of the UN, invited me to continue the work I was doing at IIASA there. We then moved the following year to New York City where we spent six years. Destiny was kind to me again as I then received a promotion within the United Nations with the opportunity to go to Nairobi and work with the UN agency dedicated to urban and housing problems. My family and I spent five years there. During this time I had the opportunity to engage in field activities in Latin America, African and Asian countries.

In 1992, we moved back to Mexico after receiving an invitation to work as General Director Of Urban Development within the Federal Ministry of Social Development. This was again destiny's kindness. In 1971, when I was finishing college in Mexico City, I worked for a year in a small consulting firm with an economist who was also finishing his degree - Luis Donaldo Colosio. We became very good friends since then. When I was at IIASA, the Institute wanted to pursue a case study that took into account the economic situation of Mexico at that time with many other factors. That gave me the opportunity to recommend Luis Donaldo Colosio, who was then at IIASA from 1978-1979. When he returned to Mexico, he entered at a low level Mexican bureaucracy. In 1992, almost ten years later, Luis Donaldo Colosio was promoted to the Ministry of Social Development. When I called to congratulate him, he asked me when I was planning to come back to Mexico. My answer was when he would invite me. One month later I received the job offer, and many colleagues at the UN were surprised I was leaving my permanent position.

My professional experience is divided with 20 years abroad and 20 years in Mexico, which includes a combination of academic, high-level government, and founding a private company dealing with urban planning and municipal development. In these 40 years of professional development, I've always put my time at IIASA as a key element that opened very special areas at early stages. Another important aspect in my background is that in order to finish civil engineering in Mexico one must understand mathematics very well. My professional career started in hydrology, then shifted to urban systems engineering in the US, demography at IIASA, and continued at the United Nations with research in demography and aspects of social and economic affairs (not from a quantitative point of view). At IIASA, you have the opportunity to interact with high level individuals working in very different disciplines. I don't know of another place where this happens, and my message is to young researchers, to take advantage of this Institute and let it be the key element for your professional career. I hope my story may inspire the next generation of researchers. I'm very happy to have had the chance to now return to IIASA and look forward to future possibilities.

Dr. Castro was previously Deputy General Director of Mexico-USA Border Affairs at the Ministry of Foreign Affairs, where his main responsibility was on binational issues along the border on infrastructure, trans-border water, energy and environmental negotiations at federal and local levels. He is the President of the Municipal and Urbanistic Engineering Commission, Academy of Engineering since 2014, and and Emeritus Member of the Mexican Association of Civil Engineers. During his 40-year career, he has participated in many domestic and international organizations in programs and policy areas related to economic and social development, infrastructure, population, internal and international migration and urbanization, always combining both qualitative and quantitative approaches. Dr. Castro was the first Mexican research scholar at IIASA, where he worked on internal migration and multiregional population modeling research in IIASA member countries and Mexico (1977-1982). From 1982-1988, he served as a Population Affairs Officer in the Department of International Economic and Social Affairs at the United Nations Headquarters, New York, where he focused on population, urbanization, migration, and development. He also worked on impact evaluation of urban programs/projects in different developing countries for the UN Habitat Agency for Human Settlements in Nairobi, Kenya (1988-1992). In Mexico, Dr. Castro has served as Technical Secretary of 455 higher technological education institutes and universities (ECEST) at the National Ministry of Education; Principal Research Coordinator at the Housing Institute of Mexico City; Deputy Director-General, National Housing Council; founder and general director of a consulting firm specialized on state and municipal urban systems; research scholar with both El Colegio de México and at the Engineering Institute of the National University of Mexico (UNAM); and General Director of Urban Development at the Ministry of Social Development in charge of a very successful federal program named “100 Cities Program” dealing with land use, public transportation, environmental aspects and urban planning in most strategic cities in Mexico. He is coauthor and publisher of more than 40 papers and books on migration, population growth, urban sustainability, housing and national public policies on urban development.

What the Age Composition of Migrants can Tell Us. (IIASA Research Reprint)