IIASA’s Systems Analysis Conference 2015 was in honor of Howard Raiffa, with one session dedicated to Howard’s work and vision for the future of systems analysis. The following is based on an interview with Ralph, who together with Detlof, visited Howard to record Howard’s welcoming message on video.

IIASA’s Systems Analysis Conference 2015 was in honor of Howard Raiffa, with one session dedicated to Howard’s work and vision for the future of systems analysis. Speakers commemorated his pioneering contributions to the field by showing how these are influencing contemporary research and practice. Chaired by Detlof von Winterfeldt, presenters in this session included David Bell, Ali Abbas, Raimo Hämäläinen, and Ralph Keeney. The following is based on an interview with Ralph, who together with Detlof, visited Howard to record Howard’s welcoming message on video.  This article below may be of interest to all the alumni who worked with and remember IIASA when Howard Raiffa was the Director.

Howard and Estelle are currently living in Tucson, Arizona full time.  About a year and a half ago, they decided that living in the Boston area was a little more difficult when considering outdoor exercise and enjoyment, so they decided to stay in Tucson.  They’re in a wonderful community, a little bit north of Tucson, which has great facilities for additional learning, courses and activities.  They enjoy it very much.

In the first discussions regarding the Systems Analysis Conference, the IIASA Council wanted to honor Howard by dedicating the event to him.  So I called Howard to ask if this would be something that he would appreciate, and he said he would certainly be pleased.  In my mind, the reason that he was pleased was that it might do something helpful and useful to IIASA’s future activities.  Publicity for himself is nothing that concerns him.  His interests are aligned with giving attention to the Conference, to IIASA, and the Institute’s future activities.

To make the video, Detlof von Winterfeldt flew in from Los Angeles, where he’s at the University of Southern California, and I flew in from San Francisco.  We spent three days with Howard and Estelle at their home.  On our third day, a videographer came, and we taped Howard’s welcoming address for the Systems Analysis Conference.

During our visit with Howard, we spent a lot of time talking about IIASA, uses of systems analysis, and the opportunities for systems analysis that still remain to do innovative and very productive applications.  He’s always been very interested in IIASA since before its beginnings. As everyone knows, he was involved with the creation of the Institute, but his interest didn’t stop after his term as Director.  He still has great interest in its activities, contributions, and potential.

Howard’s quote from his welcoming remarks to the conference was the basis for my conference presentation. During our visit, Howard said “Looking back to what has been accomplished in systems analysis over the past decades, it seems that there has been less progress than desirable with integrating methodology with real decision making.”  We talked a lot about this.  When Howard was at IIASA, several of the analyses had the alternatives of the decision-makers as the input and their consequences of concern to the decision-makers as the output. For some projects, we built value models to evaluate the relative desirability of those possible consequences to calculate the desirability of the alternatives. What we didn’t have then was the sophisticated level of systems analysis models available today nor did we have the computer power for so much analysis.

What we did then, namely including value models as part of a systems analysis model to evaluate the possible impacts of each policy alternative, is rarely done today.So by including the decision-makers’ alternatives and their interests, we can improve the systems analysis models, and Howard’s interested in that.I can’t say if he believes that is enough, but I think he would be pleased with more attention given to the involvement of policy makers early in applications. How could we better find out what their real interests and concerns are, understand what options they feel they have, and address this in analyses?Being a pragmatist, I believe that Howard would feel that the ultimate degree of success of the Systems Analysis Conference depends on its influence on that involvement occurring in practice in ongoing and future projects at IIASA.

Our recent visit was the first time Detlof and I have visited Howard together in a long time.  We went once before Detlof became Director of IIASA, and I’m sure Detlof spoke with him when he was in the US during his term as Director. I speak with Howard and Estelle on the telephone every few weeks and regularly visit them about twice a year. During my time at IIASA, I worked with both Howard and Detlof.  David Bell, who was also at the Systems Analysis Conference, was also at IIASA with Howard then and later worked together with him at the Harvard Business School for many years. 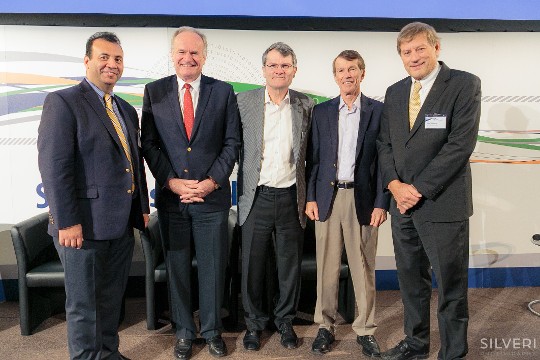