For over two decades the International Geosphere-Biosphere Programme (IGBP) has provided critical scientific leadership and knowledge of the Earth system to help guide society onto a sustainable pathway. 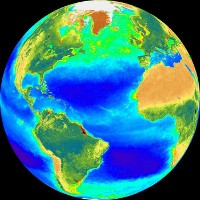 Over this time IIASA has been a key partner and supporter of the IGBP and many IIASA staff have held positions within the IGBP leadership and Scientific Committee. This year many of the activities undertaken by the IGBP will transfer to the new global Future Earth initiative.

The final meeting of the IGBP Scientific Committee will be hosted at IIASA during 28-30 April 2015. To celebrate the success of the IGBP, IIASA and IGBP under the patronage of Mrs. Margit Fischer, First Lady of Austria, will jointly host a Scientific Symposium "Integrated Science for Sustainable Transitions" – on Wednesday, 29 April 2015.

This will be followed by a Public Lecture, by Professor Will Steffen, a former Executive Director of IGBP and internationally acclaimed climate scientist.

The symposium and lecture will also act as a memorial to Dr. Mike Raupach, a co-founder of the Global Carbon Project, and one of the world’s leading climate change scientists and communicators, who sadly passed away on February 10 this year. The symposium will focus on the importance and role of integrated science approaches in the future global sustainability agenda.

Public Lecture "Global Change and the Earth System: A Planet in Transition" by Professor Will Steffen, Executive Director of the ANU Climate Change Institute at the Australian National University

This tour of Earth System science begins in the 1980s, when a large body of research began to coalesce around the major components of the planetary environment. This natural-science-driven, bottom-up approach aim to understand the “planetary machinery”, and delivered new insights into the Earth’s major cycles, for example, water and carbon. Complex system science deepened our understanding, introducing concepts such as switch-and-choke points, abrupt changes, and limit cycles. Humans came sharply into the picture 15 years ago with Paul Crutzen’s introduction of the Anthropocene, the proposed new geological epoch of planet Earth. A few years later the Great Acceleration graphs showed that the human enterprise and the Earth System began to evolve in lock-step from the middle of the 20th century. New types of scholarship – the social sciences and economics – joined with natural scientists to explore the implications of the Anthropocene and the Great Acceleration. Finally, humanities scholars have added the critical knowledge that illuminates the development of our societies through time and explores our relationship to the rest of nature. Critically, they have challenged us with the simple but profound question: just where on Earth are we going?

About Professor Will Steffen: Will Steffen is an Earth System scientist at the Australian National University (ANU), Canberra, and is a Senior Fellow at the Stockholm Resilience Centre, Sweden. From 1998 to mid-2004, Steffen served as Executive Director of the International Geosphere-Biosphere Programme, based in Stockholm. His research interests span a broad range within the fields of global change and Earth System science, with an emphasis on incorporation of human processes in Earth System modelling and analysis; and on sustainability and global change.

4. Where is Land Used and Where are the Products Consumed? - Helmut Haberl

1. Global Change and the Earth System: A Planet in Transition - Will Steffen