IIASA is inviting over 2000 alumni from around the world to Laxenburg on 29 April to meet former colleagues and share memories, experience, and stories of success and connect with current IIASA researchers and staff. 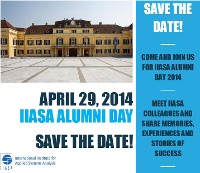 We are inviting all of our alumni to participate in the day. If you are able to attend, please register with a brief email.

At the event, we would like to share stories of where our alumni are today as well as pictures from their time at IIASA.  Please send us your updates, pictures and any anecdotes that you consider interesting from your time at IIASA. We hope to see many of you there!

The following is the full length recorded live stream for those who could not participate in person.

Petr Aven tells of his time at IIASA as a young scientist in 1977 and a research scholar in the late 1980s and early 1990s, when he worked with an international team of economists to develop a blueprint for the economic transition of the Soviet Union as part of IIASA's Economic Transitions and Integration project. Following his time at IIASA, Aven became Minister of Foreign Economic Relations for the Russian Federation from 1991–1992, and President of Russia's largest private bank, Alfa-Bank, from 1994 to June 2011. Today he is Chairman of the Supervisory Board at Alfa Banking Group and Board Member of Alfa-Bank Russia.

Ruth Steiner shares memories from her time at IIASA as Head of the Personnel Department from 1973-1983.

A Glimpse of Our Speakers

Shonali Pachauri is currently Senior Research Scholar in the Energy (ENE) Program at the International Institute for Applied Systems Analysis (IIASA). She joined IIASA in 2005. Her research over the last decade has focused on the socioeconomic, demographic and environmental dimensions of household energy use in the developing world. In her present capacity she coordinates and leads research on analyzing heterogeneities in energy access and use in the developing world, policy pathways for achieving universal modern energy access, and assessing the wider impacts of this for sustainable development.

David McCollum: How Do We Assess Possible Energy Futures?

David McCollum is a Research Scholar with IIASA's Energy (ENE) Program, having joined the group in February 2011. His main fields of scientific interest include techno-economic analysis of advanced energy and transport technologies and the development and application of energy-economic and integrated assessment models. His research attempts to inform national, regional, and global energy and environmental policies on matters related to climate change, sustainable transport, energy security, and air pollution.

Sabine Fuss studied international economics and received her MSc from the University of Maastricht, where she also completed her PhD, which focused on sustainable development in the energy sector. Before joining the Mercator Research Institute on Global Commons and Climate Change (MCC) as Head of the Resources and International Trade Group, she led a group working on the development of economic methods with emphasis on uncertainty and risk at IIASA's Ecosystems Services and Management (ESM) Program. She was responsible for international and national projects in the area of climate change mitigation and adaptation with special focus on land use and various other functions.

Alumni On the Blog

on the Alumni Assocation