Environmental management presents major challenges, and a variety of obstacles stand in the pathways to solutions. These obstacles, however, also present opportunities, and Simon Levin will explore some of these. 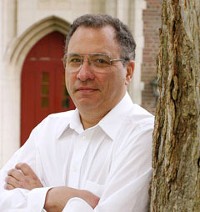 This lecture is the fifth in a series on scientific topics of mutual interest, aimed at a broad academic audience, decision makers and the public, organized in collaboration with the Austrian Academy of Sciences. The lecture will take place on Monday, 10 November 2014, at the Conference Center Laxenburg.

Conference Center Laxenburg, Schlossplatz 1, 2361 Laxenburg
There will be a bus leaving at 17:00 from Museum für angewandte Kunst (Stadtpark entrance), Weiskirchnerstrasse 3, 1010 Vienna, and returning to Vienna at 19:45.

Environmental management presents major challenges, and a variety of obstacles stand in the pathways to solutions. These obstacles, however, also present opportunities, and this lecture will explore some of these. Key among them are the development of truly multidisciplinary approaches, exemplified by the Beijer Institute and the Stockholm Resilience Centre, to the development of general conceptual and theoretical frameworks that lead to practical solution to specific problems. Ecosystems and the biosphere are complex adaptive systems, and are parts of a larger coupled social-environmental complex adaptive system that presents unique challenges for management.

Simon A. Levin received his B.A. from Johns Hopkins University and his Ph.D. in mathematics from the University of Maryland. At Cornell University 1965-1992, he was Chair of the Section of Ecology and Systematics, and then Director of the Ecosystems Research Center, the Center for Environmental Research and the Program on Theoretical and Computational Biology, as well as Charles A. Alexander Professor of Biological Sciences (1985-1992). Since 1992, he has been at Princeton University, where he is currently George M. Moffett Professor of Biology at the Department of Ecology and Evolutionary Biology. He retains an Adjunct Professorship at Cornell. His research interests are in understanding how macroscopic patterns and processes are maintained at the level of ecosystems and the biosphere, in terms of ecological and evolutionary mechanisms that operate primarily at the level of organisms; in infectious diseases; in ecological economics; and in the interface between basic and applied ecology. Levin is a Fellow of the American Academy of Arts and Sciences and the American Association for the Advancement of Science as well as a Member of the National Academy of Sciences and the American Philosophical Society and a Foreign Member of the Istituto Veneto and of the Istituto Lombardo. He chaired the Governing Council for IIASA (2003-2008). Levin is a former President of the Ecological Society of America and the Society for Mathematical Biology, and a past Chair of the Board of the Beijer Institute of Ecological Economics. Among other awards, he won the MacArthur Award (1988), the Distinguished Service Citation (1998) and the Eminent Ecologist Award (2010) of the Ecological Society of America, the Okubo Award (2001) of the Society for Mathematical Biology and the Japanese Society for Theoretical Biology, the Dr. A.H. Heineken Prize for Environmental Sciences by the Royal Netherlands Academy of Arts and Sciences (2004), the Kyoto Prize in Basic Sciences (2005) by the Inamori Foundation, and the Distinguished Scientist Award of the American Institute of Biological Sciences. Most recently, he was honored with the Ramon Margalef Prize in Ecology (2010) , the John and Alice Tyler Prize for Environmental Achievement (2014), and the Luca Pacioli Award (2014). Levin has mentored more than 100 graduate students and postdoctoral fellows.

On the blog: Six questions for Simon Levin