IIASA leadership at the NASEM workshop on science diplomacy 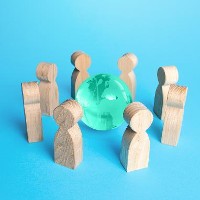 The event, funded by the U.S. National Science Foundation, aims to help the Global Research Council (GRC) explore options for using science diplomacy to accomplish the objectives of national funders of basic research. The workshop has several goals, including: identifying structures currently available for international basic research cooperation in a frame of science diplomacy; highlighting areas within basic research that might be worth exploring in greater depth to better connect research funders and science diplomacy practitioners; exploring opportunities for the GRC and funder communities to work together on those areas and projects; and discussing roles that multilateral organizations might play in contributing to international basic research cooperation.

Van Jaarsveld spoke at the panel discussion “Perspectives of international scientific institutions that conduct research and/or represent the views of the scientific community" on 15 March 2021.  He was joined by E. William (Bill) Colglazier, Editor-in-Chief of Science & Diplomacy and Senior Scholar in the Center for Science Diplomacy at the American Association for Advancement of Science (AAAS); Heide Hackmann, Chief Executive Officer of the International Science Council (ISC); Segenet Kelemu, Director General and CEO of the International Centre of Insect Physiology and Ecology (icipe) Nairobi, Kenya; and Charlotte Lindberg, Director for International Relations of the European Organization for Nuclear Research (CERN), among others.