A high-level visit to strengthen IIASA’s partnership with India and participate in the Delhi Sustainable Development Summit. 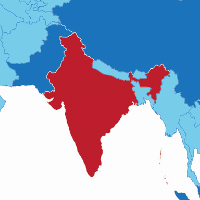