US Ambassador to Austria visits IIASA 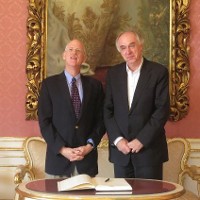 Ensher assumed his post representing the United States to the Vienna Office of the United Nations and the International Atomic Energy Agency in July 2015. The visit to IIASA was an opportunity for him to receive an overview of the institute's history, ongoing research activities, and to discuss areas of possible further collaborations.

The US was a founding member of IIASA when it was established in 1972 and research collaborations have been highly productive ever since. The US National Member Organization is the National Academy of Sciences, which partners with the White House Office of Science and Technology Policy and the National Science Foundation to promote cooperation with American scientists, research institutions, and government agencies.

During their meeting Kabat and Ensher talked about the ongoing collaborations that IIASA has with US partners, and in particular some of the cross-cutting Futures Initiatives that IIASA is coordinating. They also identified potential new research areas that could be explored. 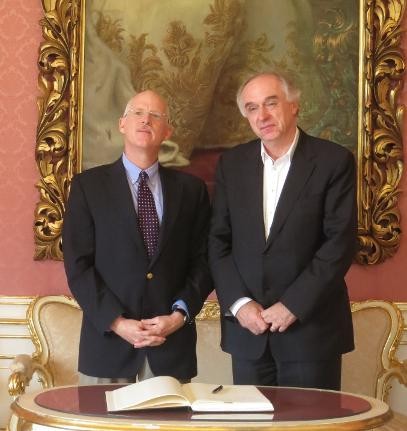 IIASA ACTIVITIES WITH THE US