Pavel Kabat receives high accolade from Her Majesty, Queen Beatrix of the Netherlands

IIASA Director and CEO Professor Dr. Pavel Kabat has been awarded one of the highest distinctions of the Kingdom of the Netherlands for his longstanding contribution to science and the science policy interface, both in the Netherlands and internationally. 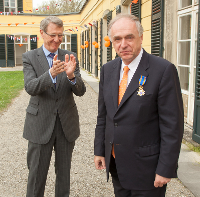 The honor was presented to Kabat by his Excellency Peter van Wulfften, Ambassador of the Kingdom of the Netherlands on behalf of Her Majesty Queen Beatrix at a ceremony at IIASA on 29 April 2013, to celebrate Dutch Queens Day. Kabat was named Knight in the Order of the Netherlands Lion,  a national order of chivalry founded in 1815 by King William I, which recognizes excellence in the arts, science, sport, and literature. The honor is a recognition of Kabat’s outstanding interdisciplinary research focusing on the nexus areas of water and climate.

Kabat, a water and climate expert with a distinguished career in scientific research and research management, came to IIASA from Wageningen University in the Netherlands where he remains a Professor of Earth System Science and is a Board Member of the Royal Dutch Academy of Arts and Sciences’ Institute for Integrated Research on the Wadden Sea Region. 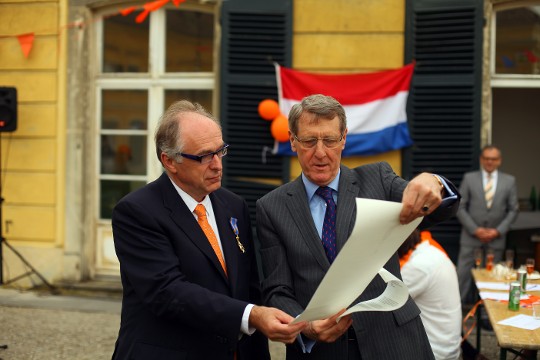