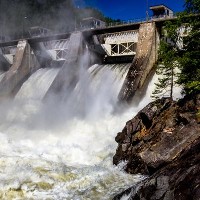 Thermoelectric (nuclear or fossil-fuelled) power plants, supply 91% and 78% of total electricity in the US and Europe respectively, thus disruption to their operation is a significant concern for the energy sector.

A study published today in Nature Climate Change projects further disruption to supply, with a likely decrease in thermoelectric power generating capacity of between 6-19% in Europe and 4-16% in the United States for the period 2031-2060, due to lack of cooling-water. The likelihood of extreme (>90%) reductions in thermoelectric power generation will, on average, increase by a factor of three.

Compared to other water use sectors (e.g. industry, agriculture, domestic use), the thermoelectric power sector is one of the largest water users in the US (at 40%) and in Europe (43% of total surface water withdrawals). While much of this water is ‘recycled’ the power plants rely on consistent volumes of water, at a particular temperature, to prevent overheating of power plants. Reduced water availability and higher water temperatures - caused by increasing ambient air temperatures associated with climate change - are therefore significant issues for electricity supply.

According to the authors, while recirculation (cooling) towers will be affected, power plants that rely on ‘once-through cooling’ are the most vulnerable. These plants pump water direct from rivers, lakes, or the sea, to cool the turbine condensers, water is then returned to its source, often at temperatures significantly higher than when the water entered the plant, causing yet another problem, that of downstream thermal pollution.

“Higher electricity prices and disruption to supply are significant concerns for the energy sector and consumers, but another growing concern is the environmental impact of increasing water temperatures on river ecosystems, affecting, for example, life cycles of aquatic organisms,” says Michelle van Vliet, from Wageningen University and Research Centre.

Both the US and Europe have strict environmental standards with regard to the volume of water withdrawn and the temperature of the water discharged from power plants. Thus warm periods coupled with low river flows can lead to conflicts between environmental objectives and energy production. Additionally, given the substantial investments and the long-life expectancy (50-60 years) of thermoelectric power plants, such projections are important for the electricity sector such that it can adapt to changes in cooling water availability and plan infrastructure investments accordingly.

One adaptation strategy is to reduce reliance on freshwater sources and replace with saltwater, according to co-author Pavel Kabat, Director/CEO of the International Institute for Applied Systems Analysis (IIASA). “However given the life expectancy of power plants and the inability to relocate them to an alternative water source, this is not an immediate solution but should be factored into infrastructure planning. Another option is to switch to new gas-fired power plants that are both more efficient than nuclear- or fossil fuel- power plants and that also use less water.”

The study focused on 61 power plants in central and eastern US and 35 power plants in Europe, both nuclear and coal-fired power plants with different cooling systems were included. Considering the projected increase in demand for electricity in these regions and globally, the study reinforces the need for improved climate adaptation strategies in the thermoelectric power sector to ensure future energy security and environmental objectives are not compromised.

The projections are based on new research that combines hydrological and water temperature models over the twenty-first century with an electricity production model. The models consider two contrasting scenarios for the energy sector - one of low levels of technological change in the energy sector and one that assumes environmental sustainability and a rapid transition to renewable energy.

The research was undertaken by an international team of scientists from the Earth System Science and Climate Change Group, Wageningen University and Research Centre; The Netherlands, The Department of Civil and Environmental Engineering, University of Washington, Seattle, USA; Forschungszentrum Jülich, Institute of Energy and Climate Research–System Analyses and Technology Evaluation, Jülich, Germany; and the International Institute for Applied Systems Analysis, Laxenburg, Austria.

The study was supported by the European Commission’s FP6 WATCH project and through the FP7 ECLISE project.