Many IIASA colleagues will be saddened to learn of the passing of Professor Dr. Wolf Häfele on 5 June 2013, aged 86 years, in Essen, Germany. 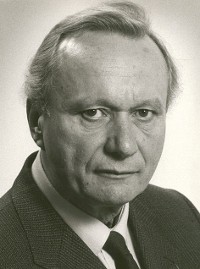 Wolf Häfele, a theoretical physicist by training, was IIASA's first Energy Program Leader from July 1973 to November 1981. He was instrumental in bringing together energy scientists from East and West to produce the first truly global and long-term study of future energy,   Energy in a Finite World. The book, which was the result of a seven-year study, conducted at IIASA and involving over 140 scientists from 20 countries,  analyzed future energy needs and trends for the period 1980 to 2030 for every country in the world. It was the first report to cover energy perspectives in the Soviet Union. The research carried out at that time was remarkable in its scope and reach, and also quite prescient in projecting the need by 2030 to make a critical and ultimately necessary transition from a global energy system based on depletable fossil fuels to one based on non-depletable, sustainable resources.

From January 1975 until 1981,   Professor Häfele was also the Deputy Director of IIASA, before being appointed  Director General of the then Nuclear Research Center in Jülich in the Federal Republic of Germany. His life-long research work earned him the epithet of "father of the fast-breeder reactor" in Germany.

Wolf Häfele remained close to IIASA, being awarded, on his departure, the rank of Honorary Scholar and also being appointed as IIASA Council member for the German National Member Organization.  In 1983 he was presented with the Award of Honor for Science and Art, First Class,  by the Republic of Austria  for "his outstanding work in the  field of energy and systems research" while at IIASA—one of many awards and prizes he was to receive in the course of his illustrious career.

In the Energy Journal (2,3, p 17) Professor Dennis Meadows details a colleague's meeting with Häfele—"an honored and respected scientist"—at a workshop at IIASA in 1981.  "Large in all dimensions," Meadows writes, Häfele was "dressed with Teutonic precision" and clearly was "the dominant intellectual and administrative figure" of IIASA's Energy Systems Program.

Häfele’s work at IIASA in the 1970s laid the groundwork for IIASA’s energy research, which has become fundamental in shaping the global transformation toward a sustainable future. Those of us who knew Wolf Häfele and worked with him owe him a profound debt for providing the investigative spirit, impetus, and direction that still inspire and drive the IIASA Energy Program today.