For
biofuels and climate, location matters

Dedicating more land to biofuel production can lead to increased greenhouse gas emissions, which take decades to make up for. A new study shows that geography is a key factor determining how big that impact is. 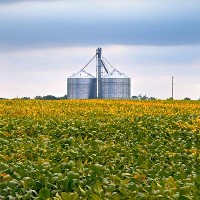 The location of land converted for biofuel production is key in calculating its impact on the the climate. © Fotomak | Dreamstime.com

A new study published in the journal Nature Climate Change shows that, when looking at the production site alone, growing biofuel crops can have a significant impact on climate depending on location and crop type. The study is the first geographically explicit life cycle assessment to consider the full range of greenhouse gases emissions from vegetation and soil carbon stock to nitrogen fertilizer emissions in all locations in the world.

In the last couple of years, research has begun to raise questions about the sustainability of biofuels. Life cycle assessments—a method that calculates the environmental impact of a product through its entire production and use cycle—have returned uncertain results on biofuels, and new research has also begun to consider carbon emissions caused by land use change.

“When you convert wetlands or forests for biofuel production you lose a major carbon sink, so even if you are saving emissions by reducing fossil fuel use, in the short term you are increasing total emissions,” says IIASA Ecosystems Services and Management Program Director Michael Obersteiner, who co-authored the study along with researchers from IIASA, Radboud University in the Netherlands, and other partners.

The new study provides a method of accounting and evaluating biofuels based on a field-level high resolution greenhouse gas accounting. It calculates the time it would take, on a specific piece of land, for biofuel production to make up for the emissions it generates by converting from what was there prior to biofuel production. The researchers call this measure “greenhouse gas payback time.”

The study was led by Radboud University PhD candidate Pieter Elshout. He says, “Our model is the first that offers a global, spatially-explicit overview of biogenic gas emission resulting from crops used to produce biofuels. In developing this model, our calculations of the durations of payback times took account of the entire production chain for fossil fuels and biofuels with the accompanying greenhouse emissions.”

They find that the payback time varies widely around the world depending on the current land use of the specific location, crop type, and cultivation method. The most important factor was the location, according to the study, accounting for 90% of the variation on payback time.

“This study shows that geography is really the number one factor influencing the direct climate impact of biofuel production. We need to have more precise measurements of what is currently happening on a piece of land when evaluating the direct effects on biogenic carbon emissions of biofuels to be grown there,” says Obersteiner. 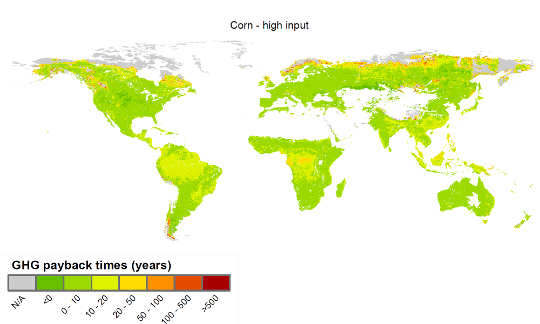 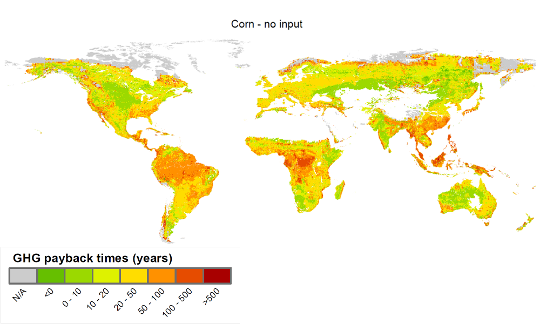 Greenhouse gas payback times for corn-based bioethanol, in extensively farmed crop location, (where fertilizers and irrigation are not used).

The researchers found that current land use and crop type played a big role in the payback time. When grown with no input (such as irrigation or fertilizer), rapeseed is found to have the lowest direct impact, with an average payback time around 20 years, and sugarcane the longest, with a global median of 60 years. When it comes to intensive agriculture, however, payback times systematically decrease for all crop types. The most efficient feedstocks appear to be cereals, such as winter wheat and corn, with payback times lower than 10 years.

While this study unearthed the value of high resolution information for the assessment of biofuels impacts, a broader sustainability perspective on agricultural products emissions remains indispensable, say the researchers. Previous IIASA research has shown that sustainability criteria limited to biofuels could prove inefficient by ignoring other agricultural uses and consumption changes in other parts of the world.

In addition, indirect land use change impacts can change the overall emission balance of biofuels, by displacing other crop production, through trade and demand responses. IIASA is preparing a complementary study on this matter, expected to be published this summer. It looks at a large range of crop-based but also advanced biofuels, using cereal straw or short rotation coppice.

“Today’s paper confirms that standard life cycle assessment approaches, by ignoring geography, have overly simplified biofuel greenhouse gas assessment. Bringing in the full agricultural system responses with indirect land use change could lead to even more nuanced insights on the final environmental merit of the different biofuel feedstocks,” says Hugo Valin, one of the lead authors of the ongoing study.