FotoQuest Austria, a summer citizen science campaign, allows participants to explore the outdoors while taking pictures and collecting observations for science, using a game-like app on their mobile devices. 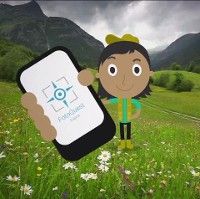 IIASA researchers today launched a summer-long citizen science campaign, FotoQuest Austria. The new game-like app, which is aimed at a German-speaking audience of all ages, allows participants to take geo-located photographs of landscapes for science.

The project aims to gather information about land use change in Austria that is important for research on climate change and flood risk.  It also aims to spark a sense of adventure and exploration, encouraging participants to get outside and enjoy nature. Participants can also compete for points and prizes.

“Our goal for this project is to create an openly accessible archive of geo-located pictures and information on how land is used in Austria. The campaign will help IIASA researchers generate information covering all of Austria about land cover,” says project leader Steffen Fritz.

In particular, the researchers are interested in urban expansion and the preservation of wetlands, which store large amounts of carbon dioxide and are therefore important for limiting climate change.

Fritz says, “There has not been a proper inventory of wetlands in the last 25 years. We know that wetlands are shrinking, but we don’t know by how much. As wetlands become drained they release this CO2 into the environment, which has large implications for climate change. With increased soil sealing due to urban expansion we also face increased instances of flooding”

The current campaign is the first of several planned over the next four years. By providing a snapshot of land cover over the course of several years, researchers will be able to track changes in land use.

Combining adventure and science
FotoQuest Austria is the latest in IIASA’s series of citizen science initiatives developed by the Geo-Wiki team, with a growing focus on citizen engagement and participation.

Fritz says, “In addition to providing important information for our country’s future, FotoQuest Austria is an outdoor adventure calling on each of us to explore Austria’s countryside and learn what crops and plants grow around us. It is an opportunity to appreciate and connect with our surroundings through photographing and observing different landscapes. It builds awareness, motivating us all to protect and care for the land.”