Without new subsidies and policies to support increased energy access, new climate policies could push access to modern energy out of reach for millions in Asia. 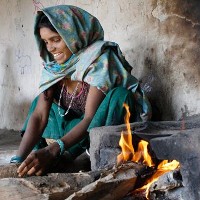 Stringent climate policies would increase the cost of fossil fuels, including those used for the cleaner burning stoves (such as kerosene, liquefied petroleum gas, electricity, and piped gas) that are slowly replacing traditional cooking fuels. Without simultaneous targeted efforts to increase funding for energy access, many who would otherwise have been able to switch from traditional solid fuels to modern cooking fuels would no longer be able to afford the switch, according to a study published in the first issue of the new journal Nature Energy.

Currently, three billion people worldwide rely on solid fuels such as firewood, charcoal, coal, and dung for cooking. Burning these types of fuels, especially indoors, is a major source of air pollution, and is estimated to lead to 4.3 million premature deaths each year. The Sustainable Development Goals have set a target of achieving universal access to modern energy by 2030—but at the same time they call for urgent action to combat climate change.

“There is a lot of pressure on developing countries to take action on climate change. But there has not been much research on how these two policy goals interact,” says IIASA researcher Shonali Pachauri, who led the study. “We wanted to find out if there are trade-offs, and if so, how can we design policies that get around this problem?”

The new study focused on South Asia, where an estimated 72% of the population still relies on solid fuels for cooking. It shows that on the current trajectory, by 2030 that number could be reduced to 727 million (35% of the population). But with climate policies and no complementary energy access policies, the study shows, an additional 336 million people who would have otherwise switched to modern fuels will be unable to afford the switch.

The researchers relied on “Access,” a residential fuel choice model and the IIASA Model for Energy Supply Strategy Alternatives and their General Environmental Impact (MESSAGE) to evaluate four scenarios for climate mitigation at varying levels of policy stringency, each considering a range of subsidies supporting clean fuels or stoves. 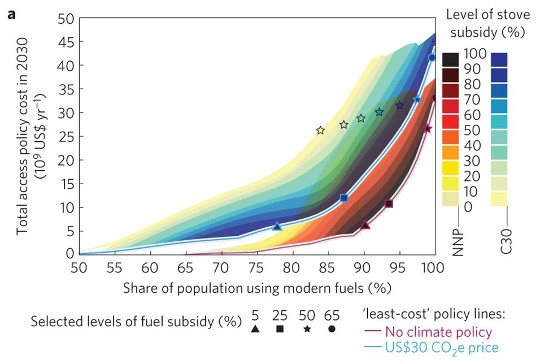 “We found that as we increased the carbon price, the detrimental effect on energy access increased disproportionately to the beneficial effect for the climate,” says Colin Cameron, a co-author on the paper.

The study also found that the people most impacted by policies on climate and energy access were neither the poorest nor the richest, but rather those slightly above the poverty line but for whom energy access may be just out of reach.

The good news is that energy access subsidies could offset the negative effects of rising fuel costs spurred by climate policy.  However, the study found a broad range of costs for energy access subsidies with similar impacts. The most efficient subsidies, according to the researchers, were those that focused on supporting cook-stove purchases along with fuel bills. Pachauri explains, “For many people, the initial investment in a stove is just too big. Getting over that hurdle may be the push many people need to make the switch to clean-burning fuels.”