Efforts to reduce greenhouse gas emissions in the energy sector could lead to greater pressure on water resources, increasing water use and thermal water pollution. Dedicated adaptation measures will be needed in order to avoid potential trade-offs between the water and climate change impacts of the energy system. 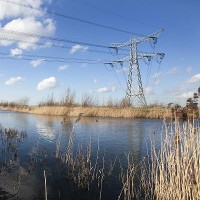 Climate mitigation efforts in the energy system could lead to increasing pressure on water resources, according to a new study published in the journal Environmental Research Letters. Yet increased energy efficiency and a focus on wind and solar power, which require less water, or the switch to more water efficient cooling technologies could help avoid this problem, the study shows.

The new study aimed to systematically pinpoint the drivers of water demand in the energy system, examining 41 scenarios for the future energy system that are compatible with limiting future climate change to below the 2°C target, which were identified by the IIASA-led 2012 Global Energy Assessment.

“While there are alternative possible energy transition pathways which would allow us to limit global warming to 2°C, many of these could lead to unsustainable long-term water use,” says IIASA researcher Oliver Fricko, who led the study, “Depending on the energy pathway chosen, the resulting water use by the energy sector could lead to water allocation conflicts with other sectors such as agriculture or domestic use, resulting in local shortages.”

The energy sector already accounts for approximately 15% of global water use. According to the study global water use of energy could, however, increase by more than 600% by 2100 relative to the base year (2000). Most of this water usage comes from thermoelectric power plants—centralized solar power plants as well as nuclear, fossil fuel or biomass-powered plants—that rely on water for cooling.

Water use is however not the only problem. When river or sea-water is used for power plant cooling, it gets released back into the environment at a higher temperature, a problem known as thermal pollution, which can affect aquatic organisms. The study finds that thermal pollution will increase in the future unless measures are taken to reduce such pollution through mitigation technologies.

The study highlights the importance of energy efficiency. IIASA researcher Simon Parkinson, who also worked on the study, says, “The simplest way to reduce the pressure that the energy sector puts on water resources is to reduce the amount of energy that we use by increasing energy efficiency. This is especially true for developing countries where electricity demand is set to increase rapidly.”

The study shows the importance of an integrated analysis for understanding interlinked global challenges related to water, climate, and energy. It follows a recent IIASA study showing that climate change impacts on water resources could also affect energy production capacity.

“Our findings have major implications for the way how climate change mitigation strategies should be designed. Energy planners need to put more emphasis on the local water impacts, since they may limit policy choices. Ultimately we need integrated strategies, which maximize synergies and avoid trade-offs between the water and climate change and other energy-related objectives,” says Keywan Riahi, Director of the Energy Program at IIASA.