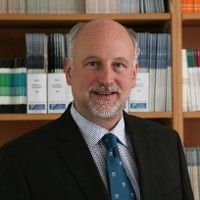 The Mindel Sheps award is given every two years for “outstanding contributions to demographic methodology,” and is one of the highest achievements in demography. Lutz received the award for his significant contribution to demographic methodology, developing the theoretical, methodological, and empirical basis for adding educational attainment to age and sex as a third demographic dimension in population dynamics. This pioneering work on human capital resulted in the recent book World Population and Human Capital in the 21st Century .

Lutz accepted the award on 1 April at an awards ceremony at the Population Association of America Annual Meeting in Washington DC.

Wolfgang Lutz is Founding Director of the Wittgenstein Centre for Demography and Global Human Capital (a collaboration between IIASA, the Austrian Academy of Sciences and the WU-Vienna University of Economics and Business). He joined IIASA in October 1985, where he is Program Director of the World Population (POP) Program. Since 2002, he has also been Director of the Vienna Institute of Demography (VID) of the Austrian Academy of Sciences and since 2008, Professor of Applied Statistics (part time) at the WU. He is also Professorial Research Fellow at the Oxford Martin School and Honorary Professor of Shanghai University.