IIASA demographer elected to US National Academy of Sciences

IIASA World Population Program Director Wolfgang Lutz has been elected as a foreign associate of the US National Academy of Sciences. 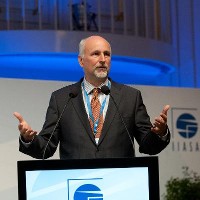 Lutz, who is also the founding director of the Wittgenstein Centre for Demography and Global Human Capital (IIASA, VID/OeAW, WU) was elected during the 153rd annual meeting of the National Academy of Sciences (NAS). Members of the group are “elected in recognition of their distinguished and continuing achievements in original research.”

Lutz is only the fourth Austrian scientist to be elected to the group, which includes 2,250 members and nearly 440 foreign associates. The group is one of the most prestigious scientific organizations in the world, and includes approximately 200 Nobel laureates.

“This is a huge honor and at the same time a mandate to further work on advancing the kind of cross-cutting analysis that IIASA does. It is indicative of this that I will belong both to the Social Science Section and the Human Environment Section of NAS ,” says Lutz.

The NAS also serves as the National Member Organization representing the USA on the IIASA governing council. The academy partners with the Office of Science and Technology Policy and the National Science Foundation to promote cooperation between IIASA and American scientists, research institutions, and government agencies.