Can palm oil be sustainable?

A new study shows to where and to what extent palm oil plantations could be expanded, while avoiding further deforestation in pristine and carbon-rich tropical forests. 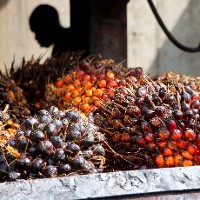 “There is room to expand palm oil production and to do it in a sustainable way,” says IIASA researcher Johannes Pirker, who led the study.

Palm oil production has expanded massively, from 6 million hectares in 1990 to 16 million in 2010, an area about the size of Uruguay. The oil, which is used for cooking and as a food additive, now accounts for about 30% of all vegetable oil used worldwide. Palm oil is controversial, in particular because much of this expansion came at the expense of biodiversity-rich tropical forests, which were cut to make room for new plantations. But oil palm farming has also contributed to lifting millions of people out of poverty in Indonesia and Malaysia, the top palm oil producing countries. And an important share of palm oil producers are small-holder farmers who rely on the commodity as their primary income.

With palm oil as the number one cooking oil in Asia, where populations are rising, demand for the oil is expected to continue growing, and many developing countries are looking to expand their production. Yet it was not clear how much land is available for expansion. In the new study, researchers started by creating a global map of where the conditions are right for producing palm oil, based on temperature, rainfall, slope, and soil type.

From a purely biophysical perspective, they found that nearly 1.37 billion hectares of land globally are suitable for oil palm cultivation, in Africa, Central and South America, and Asia. From this they then removed any land which is already being used for other purposes, such as farming, residences, or cities. For this, the researchers relied on the hybrid land cover maps developed at IIASA using crowdsourced data.

Finally, the researchers ruled out areas that are protected by law, as well as forests that are particularly valuable from a biodiversity or carbon storage perspective. With all of these areas removed, the resulting map includes an area of 19.3 million hectares of very suitable land which could potentially be available for future production. This is slightly more than the current extent of palm oil production, 18.1 million hectares. However, among this area, about half is more than ten hours drive to the closest city which might not allow for economically profitable oil production. The map, published online, is also available for download.

“This analysis will be a useful tool to identify area for future oil palm investments that meets some basic environmental standards. The maps are available to stakeholders who can combine them with local information to address other dimensions of sustainable development,” says IIASA researcher Aline Mosnier, who also worked on the study.

Growing attention to the deforestation caused by palm oil has led many companies to begin aiming for sustainability certification in their sourcing. However, the researchers argue that consumers and companies need to go a step beyond that. Pirker says, “Moves to ban palm oil are misguided. What we need to do instead is look at the origin of the oil, who is growing it how and where. Certification is a first step in the right direction but companies committed to sustainability should look in more detail at their supply chains, and consumers can demand this of them.”