Diseases evolve in response to treatment, frustrating efforts to eradicate them. A new study shows how evolution, population dynamics, and economic factors interact, providing new insight that could help inform efforts to control diseases like malaria. 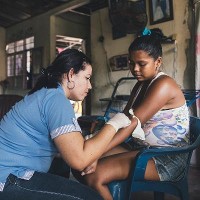 Efforts to eradicate a disease are likely to fail if medical professionals only know the target of an eradication campaign, but cannot predict the course for reaching it, according to a study published today in the Journal of Theoretical Biology. The study examined the interplay between disease evolution, human populations, and economic factors to determine how diseases can be controlled, using a new, model-based view of disease eradication.

Despite many efforts to eliminate specific diseases, there have only been two success stories: smallpox and rinderpest. Most of the world’s deadly illnesses have survived repeated efforts to eradicate them, resurging in vulnerable populations and in some cases gaining resistance to standard treatment. Malaria, for instance, infected over 200 million people in 2010, killing around 500,000 according to the World Health Organization.

“The problem with disease eradication is that it’s easy to make progress at the beginning, when you get big decreases in incidence. But then you reach the point when only a few cases pop up here and there. Once you get to this eradication end-game, it becomes very difficult to make further progress,” says Rupert Mazzucco, a researcher at the International Institute for Applied Systems Analysis (IIASA).

A graph of this process would show a fast decline in the incidence of the disease, which peters out into a long tail that the researchers call an “eradication tail.” The reasons for this are multiple: The microbes that cause disease evolve in response to changes in their environment, sometimes gaining resistance to the drugs used against them. Other eradication efforts may target the animal that spreads a disease, such as mosquitoes, which likewise may evolve or adapt in response.

Also the way human populations are structured plays a role—since diseases spread between individuals, predicting eradication tails requires mapping a population and links between diseased individuals. And crucially, economic factors contribute as well—if the money for interventions runs out, the disease may come back.

The new study examined how much each of these factors affected eradication in a model system. It showed that while all three factors were important, the economic factor played a deciding role in shaping the trajectory of disease eradication.

The general model the researchers developed can be incorporated into studies of specific diseases. “The research also informs epidemiology more broadly, providing a better understanding of the trajectory of disease eradication,” says IIASA researcher Hans Metz, who also worked on the study.