Forest ecologists have long sought to understand why so many different species of trees can coexist in the same niche. A modeling study is now providing clues. 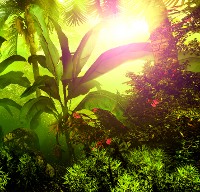 Forests, especially tropical forests, are home to thousands of species of trees—sometimes tens to hundreds of tree species in the same forest—a level of biodiversity ecologists have struggled to explain. In a new study published in the journal Proceedings of the National Academy of Sciences (PNAS), researchers at the International Institute for Applied Systems Analysis (IIASA) and their colleagues in Australia are now providing a first model that elucidates the ecological and evolutionary mechanisms underlying these natural patterns.

“Forests in particular and vegetation in general are central for understanding terrestrial biodiversity, ecosystem services, and carbon dynamics,” says IIASA Evolution and Ecology Program Director Ulf Dieckmann. Forest plants grow to different heights and at different speeds, with the tallest trees absorbing the greatest amounts of sunlight, and shorter trees and shrubs making do with the lower levels of sunlight that filter through the canopy. These slow-growing shade-tolerant species come in an unexpectedly large number of varieties—in fact, far more than ecological models have been able to explain until now.

Traditional ecological theory holds that each species on this planet occupies its own niche, or environment, where it can uniquely thrive. However, identifying separate niches for each and every species has been difficult, and may well be impossible, especially for the observed plethora of shade-tolerant tropical trees. This raises the fundamental question: are separate niches really always needed for species coexistence?

In the new study, the researchers combined tree physiology, ecology, and evolution to construct a new model in which tree species and their niches coevolve in mutual dependence. While previous models had not been able to predict a high biodiversity of shade-tolerant species to coexist over long periods of time, the new model demonstrates how physiological differences and competition for light naturally lead to a large number of species, just as in nature. At the same time, the new model shows that fast-growing shade-intolerant tree species evolve to occupy narrow and well-separated niches, whereas slow-growing shade-tolerant tree species have evolved to occupy a very broad niche that offers enough room for a whole continuum of different species to coexist—again, just as observed in nature.

Providing a more comprehensive understanding of forest ecosystems, the resulting model may prove useful for researchers working on climate change and forest management. Dieckmann says, “We hope this work will result in a better understanding of human impacts on forests, including timber extraction, fire control, habitat fragmentation, and climate change.”

The study was led by Daniel Falster at Macquarie University in Australia, who was a participant in the 2006 IIASA Young Scientists Summer Program.