Reduction of soil microbes limit feedbacks in a warming climate

Soil microbes get more active in warmer temperatures, causing increased CO2 emissions. But a new study shows that in prolonged warming, the amount of microbial biomass decreases, balancing the effect. 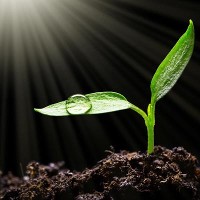 A new study published in the journal Nature Climate Change comes with rare good news on a potential climate feedback loop. IIASA guest researchers in the Evolution and Ecology and Ecosystems Services and Management programs contributed to the study, which takes advantage of a long running experiment collecting data on warming soil in an area of geothermal activity in Iceland.

“We show that there is a natural mechanism that could prevent the perpetual release of soil carbon to the atmosphere in a warmer world. This is good news!... At least, if humanity quickly gets a grip on further climate warming,” says University of Vienna ecologist and IIASA guest researcher Andreas Richter.

Soils are by far the largest reservoir of organic material on Earth. They contain more than three times the carbon currently present in the atmosphere as carbon dioxide. Microbes in soil digest dead organic material, converting it to greenhouse gases like carbon dioxide (CO2). They also get more active as temperatures warm, which has led to concern that higher temperatures associated with climate change could lead to a vicious cycle where warming soils lead to more active microbes, which cause even more greenhouse gas emissions.

Previous studies on this topic had been limited by short time spans of several  months to years, and some confusing results—in some cases microbes appeared to adapt to warming, with their responses varying over time.

"In this study, we exploited a natural warming experiment in Iceland that has been running for more than 50 years. This is decades longer than any other experiment in the world," says University of Lausanne researcher Tom Walker, first author of the study. "We collected soils that were warmed by geothermal hot springs, and used them to investigate how decades to centuries of warming will alter the activity of soil microbes."

By looking at microbial activity and soil dynamics over the longer time period, the researchers were able to see how microbes might respond to climate change in the real world.

The study revealed that after prolonged warming, approximately 40% of the carbon in the topsoil had been lost to the atmosphere, but no further losses occurred. Yet this didn’t seem to be because the microbes were slowing down their metabolism—there were no differences between control soils and warmed soil microbes in terms of physiological or metabolic changes, or changes to the community of microbes present.

"We found that even after prolonged warming, the microbes still released carbon faster when warmed, so they had not adapted to higher temperature,” says Richter, “But we discovered that there were also far fewer microbes in warmed soils. So as carbon was lost from the soil under warming, the amount  of microbial biomass also decreased. This led to a perceived deceleration of microbial activity over time".

The scientists combined the experimental findings with mathematical modelling to develop a new concept of microbial response to soil warming, which could help improve the predictions in global climate models.

"We used a mathematical model to test whether a warmed soil system can come to a new steady state that prevents further carbon loss from the soil, even without acclimation of the soil microbes themselves. Our model fits well with our observations. This concept represents a major step towards a better understanding of the feedback of soils to global warming,” says Christina Kaiser, a group leader at the University of Vienna and guest researcher in the IIASA Evolution and Ecology Program.