Current pledges for greenhouse gas emission reductions are inadequate and will further increase the challenge to reach internationally agreed climate targets, according to new research from a global consortium of 13 international research teams coordinated by the International Institute for Applied Systems Analysis (IIASA) and the Potsdam Institute for Climate Impacts Research (PIK). 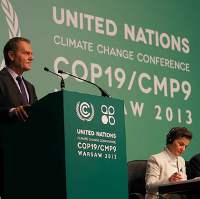 In the absence of a global agreement on emission limits, countries instead have made voluntary pledges to reduce their emissions by 2020 with the current negotiations trying to establish international agreements for emissions reductions for the year 2030. The mitigation effort of the 2020 pledges made by countries under the UN Framework Convention on Climate Change would result in significantly higher emissions in 2030 than what would be cost-effective in order to reach the long-term climate targets acknowledged by that treaty, according to a new study by research teams from Europe, Asia and the United States published in the journal Technological Forecasting and Social Change.

“The gap between where emissions are and where emissions would need to be in order to keep climate targets within reach is getting bigger and bigger,” says IIASA Energy Program Leader Keywan Riahi, lead author of the paper published today. “Our study brings together the leading research teams in the field to systematically assess the implications of this gap.”

The researchers find that adherence to the pledges would result in global emissions between 53 and 61 GTCO2e for the year 2030. While it could still be possible to meet targets starting from those levels, the options for mitigation then become much more limited and much more expensive. The new research examines the long-term implications of the short-term delay: How much would we need to cut emissions after 2030 in order to meet the 2°C target? How much would it cost? What technologies would be needed?

“AMPERE has explored the interaction between short term climate action and long term climate targets in unprecedented detail. It clearly shows that the more hesitant our actions are today, the more limited our options will be tomorrow.” says Elmar Kriegler, senior scientist at PIK and leader of the AMPERE project.

The study finds that starting from pledge pathway levels in 2030, emissions would need to decline much more quickly after 2030 in order to meet the 2°C target. That means, for example that new coal power plants built in the next few years may need to be shut down before their natural lifetime—at great cost to investors and governments.

The researchers also find difficult implications for technology with a delay in emissions cuts: The speed of deployment for carbon-neutral energy sources would need to be three times as high starting at pledge-pathway levels for 2030. The choices for energy technology also become more limited – while it could currently be possible to meet climate targets without relying on carbon capture technologies to store carbon underground, delaying climate action until 2030 will most likely leave no choice but to apply these technologies at large scale.

“There is not much time to fundamentally change the system, considering that more than half of the energy worldwide would need to come from climate friendly technologies by 2050. Our results indicate that this can be achieved at relatively modest costs if mitigation started today. Delays will not only increase the cost significantly, but would require also a global energy transformation at a pace that will be historically unprecedented” says Riahi.

The new study is an overview of the results from the AMPERE (Assessment of Climate Change Mitigation Pathways and Evaluation of the Robustness of Mitigation Cost Estimates) project funded under the FP7 framework of the European Commission, to be published in a special issue of Technological Forecasting & Social Change. It combines state-of-the-art energy and economics models and so-called integrated assessment models to explore possible pathways for cutting greenhouse gas emissions, along with costs of following those paths.

Photo: Negotiators at the COP19 Climate meeting in Warsaw in November.