Researchers from Austria, Spain, Belgium, and France will explore the worsening environmental problems related to nitrogen, phosphorus, and carbon under a new grant from the European Research Council. 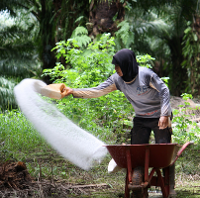 The new project, IMBALANCE-P, brings together a multidisciplinary team of researchers from four different research institutions around Europe, including IIASA. Led by Josep Peñuelas, of the Center for Ecological Research and Forestry Applications (CREAF) in Spain, the project will explore current changes in the carbon, phosphorus, and nitrogen balances in the different ecosystems of the planet and assess the impact of the imbalances between these three elements for life on Earth.

Phosphorus is a scarce but essential resource on Earth. The element is an essential element of DNA structure, cell membranes, enzymes and bones. It is mostly used in fertilizers, supporting the food demand of an ever growing population. Unfortunately it is a finite resource and there is no synthetic way of creating it. In contrast to carbon and nitrogen which are available abundantly, phosphorus reserves are limited in most natural environments, and the trend is likely to continue in the next century. These constraints have already triggered some geopolitical disputes.

IIASA Ecosystems Services and Management Program Director Michael Obersteiner will lead IIASA’s contribution to the project, which has been funded at 13.6 million euros for the next 6 years, under an ERC Synergy Grant.  The Synergy Grant is a pilot funding scheme of the ERC that supports small groups of excellent researchers jointly tackling research problems and pushing forward the frontiers of knowledge.

The IMBALANCE-P team will conduct experiments in all biomes and cultures of the world, in particular a macroexperiment in the rainforest of French Guiana, where they will study how the on-going shifts in Carbon:Phosphorus:Nitrogen balance affect biodiversity, climate, and agriculture. The researchers will also look at the effects of future phosphorus shortages on food security and will help to design future scenarios for food production under limited phosphorus resources, and effective policy actions.

IIASA will contribute integrated assessment modelling and policy analysis to the project, which will be integrated with an Earth system model run by the University of Versailles, and calibrated using field data on nutrient limitation from researchers at CREAF and the University of Antwerp in Belgium.

In particular, IIASA researchers will focus on how potential phosphorus market crises might put pressure on the global food system and create environmental ripple effects ranging from expansion of agricultural land to phosphorus price-induced changes in land management, which could exacerbate the already existing imbalance between carbon, phosphorus and nitrogen.

The new collaboration across multiple and diverse disciplines is unique, including experts in eco-physiology, metabolomics, atmospheric physics and chemistry, remote sensing, economy and agriculture. The global implications of limited resources have never been studied in such an integrated way.

Interview with Michael Obersteiner and Marijn van der Velde: The problems with phosphorus