An unprecedented comparison of agricultural economic models shows that future demand is likely to exceed previous estimates, with the biggest uncertainties coming from future changes in population and consumption. 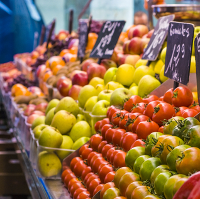 Food demand could increase by more than 59% by the year 2050, according to a new study published in the journal Agricultural Economics. The study, which compared food demand projections for 2050 using 10 different agricultural models, finds that demand is likely to increase by 59-98% between 2005 and 2050, more than the 54% projected by the FAO’s most recent analysis.

“Population and wealth have a strong influence on how much food we need to produce, which foods, and how much we waste,” says IIASA researcher Hugo Valin, who led the study. “The study shows that climate change will be a challenge for future food availability, but our future consumption patterns are an even greater challenge.”

For example, as incomes in China have risen in recent years, people have started to eat more meat and dairy, products which take more resources to produce. But it is unclear how long this trend will continue in China. Also unclear is whether countries like India, where there are also religious reasons for abstaining from meat, will follow in the Chinese pattern or stick to a dominantly vegetarian diet.

By harmonizing that set of assumptions that fed into the models, the researchers were able to compare the technical functions of the models and better quantify the uncertainties.

“You don’t want to compare apples with pears,” says Valin. “When you make projections about the future with different models, you need similar assumptions about future possible population, how income will develop, and how agriculture which change technologically. Otherwise it is very difficult to compare other model responses, such as the impacts of climate change.”

The study was conducted as part of the Agricultural Model Intercomparison and Improvement Project (AgMIP), a major international effort linking the climate, crop, and economic modeling communities with cutting-edge information technology to produce improved crop and economic models and the next generation of climate impact projections for the agricultural sector. It includes researchers at institutes including the Potsdam Institute for Climate Impacts Research (PIK), the International Food Policy Research Institute (IFPRI) and the International Institute for Applied Systems Analysis (IIASA), among others. Seven studies from the project were published over the past few weeks in a special issue of Agricultural Economics.