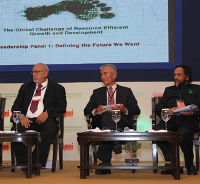 Both Kabat and Nakicenovic will be speaking in plenary sessions at the DSDS, held in New Delhi from 6-8 February. The summit, which is organized by long-term IIASA collaborator, Rajendra Pachauri and The Energy and Resources Institute, is hosted under the rubric “Attaining  Energy,  Water and Food Security for All.”

During the trip Kabat will meet with Government representatives from India and partake in the national committee meeting for India-IIASA activities, hosted by India’s National Member organization (NMO), the Technology Information, Forecasting and Assessment Council (TIFAC). Meetings include with the Ministries of Environment, of Renewable Energy, and of Science and Technology to discuss the expansion of IIASA collaborations with India.

Research collaborations between IIASA and India stretch back to the 1970s, but the relationship has recently become far more productive after India became a national member of IIASA in 2007 through TIFAC. Through multiple research collaborations, IIASA’s applied systems analysis has brought a global perspective, interdisciplinary research expertise, and policy relevance to issues ranging from the future of India’s energy system to increasing the country’s food production. Greater collaboration with IIASA has also brought Indian researchers into contact with the Institute's global network of around 1,800 active researchers and 300 research partners. These often informal connections, along with the official projects of the India-IIASA programme have resulted in over 130 joint publications since 2008. IIASA's academic training programs have also been successfully building the next generation of systems analysts in India.