New research from IIASA and the Potsdam Institute for Climate Impacts Research (PIK) shows that early action by the European Union on climate change could reduce future warming by more than 1 degree, even if other countries join later. 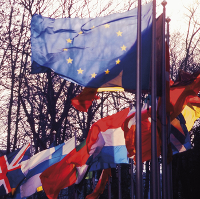 Major emitting countries may have to join the EU's effort much earlier to avoid a temporary overshoot of the 2 degree target, but even if they joined only in 2030, the overshoot would be limited to roughly 0.2 to 0.4 degrees Celsius. The initial unilateral leadership could be achieved at little extra costs for the EU. Late-comers would have the benefit of lower costs while they delay action but would face higher transient costs once their turn to decarbonize comes.

“The crisis-stricken EU is asking itself whether it can still afford climate leadership” says lead author Elmar Kriegler, a researcher at PIK. “If international climate action remains muddled, and if it takes a leader to rise above this, an EU initiative could make a big difference. A more than one degree reduction of global warming translates into a host of avoided climate damages.” However, this strategy only works if the rest of the world eventually joins, because no single region will be able to combat climate change alone. “Leading by example needs to be convincing to other countries,” Kriegler says. “Therefore, front runners best ensure success of their efforts by demonstrating the economic feasibility of strong emissions reductions and by making it attractive for others to join.”

Additional costs for the EU are estimated to be low because it already has implemented significant climate and energy policies that are expected to reduce emissions by 30 percent in 2030. The study investigated EU frontrunner action in line with its roadmap for moving to a low carbon economy, including an emissions reduction of 40 percent in 2030 compared to 1990.

The transitional challenge that late-comers face when joining a global climate regime is due to the difficulty of rapidly elevating efforts from a low to an ambitious level, according to the study. “The risk of being locked into fossil fuel infrastructure is a major argument against delayed action,” says co-author Keywan Riahi, director of IIASA’s energy program. This refers for instance to newly built coal fired power plants. “Today’s energy planners are making investment decisions in the order of hundreds of billion dollars, which can turn into stranded assets once climate policies are introduced. This is why delays are costly, besides increasing the risks that stringent climate objectives might get out of reach.”

The new multi-model study is part of the Assessment of Climate Change Mitigation Pathways and Evaluation of the Robustness of Mitigation Cost Estimates (AMPERE) project and will be published in a special issue of the journal Technological Forecasting & Social Change. AMPERE established a European platform of state-of-the-art energy-economy models to undertake a series of analyses on the implications of short term climate policy for achieving long term climate objectives. It is coordinated by PIK and IIASA. The funding is provided by the European Union.