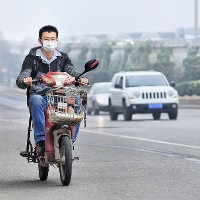 The drastic cuts in greenhouse gas emissions associated with the most optimistic climate scenarios would also lead to major reductions in air pollution, according to a new study from IIASA published today in the journal Nature Climate Change. But under more pessimistic climate scenarios, the study finds, the range of possibilities for air pollution is much more uncertain, and depends far more on air quality policies.

A growing body of research from researchers at IIASA and other institutions shows that policies to reduce greenhouse gas emissions will have a positive effect, or co-benefits, for simultaneously reducing air pollution. Greenhouse gases and air pollutants come from many of the same sources. Coal power plants, for example, emit not only carbon dioxide, but also black carbon, sulfur, and nitrogen compounds that dirty the air and lead to lung and heart disease. So cutting fossil fuel burning would cut emissions of these air pollutants, as well as the greenhouse gases that contribute to climate change.

Before the new study, these co-benefits had not been assessed in connection to the new framework of scenarios that underlie the most recent IPCC report, the Representative Concentration Pathways (RCPs).

“The RCPs span the range of possibilities between a future without mitigation of greenhouse gases to a future with ambitious climate policy,” explains Joeri Rogelj, a researcher at IIASA and ETH Zurich, who led the study. He says, “They were developed as benchmark scenarios, to be used by climate modelling groups, to facilitate a more straightforward comparison of climate model results that are somehow connected with how our world and society might evolve in the future.”

Rogelj says, “While the RCPs were developed to represent large variations in the total climate forcing, their focus was not on air pollution. It was also unclear to many researchers in the climate research community how much an effort the reductions in air-pollution emissions in the RCPs represented beyond the implementation of current policies.”

The study relied on an integrated assessment framework that combined two IIASA models – the energy system model MESSAGE and the air pollution model, GAINS, and draws on work from the IIASA Energy program and the Mitigation of Air Pollution and Greenhouse Gases programs.

In addition to work on developing the RCPs, IIASA hosts the RCP database for the research community.