Scenarios for a changing Arctic

IIASA’s new Arctic Futures Initiative explores the future of the Arctic region in all its dimensions. The initiative launched last week with an expert workshop and a policy-oriented special session in Laxenburg. 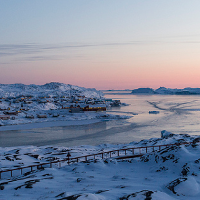 The Arctic is a region in transition. The ice-covered Arctic Ocean and the once-remote northern regions of Arctic countries are warming far more quickly than the rest of the planet. Researchers expect that Arctic sea ice may melt completely in summers by the end of this century, opening vast new areas of open water to shipping, transit, resource extraction, and fishing.

What do these changes mean for people who live in the Arctic? For the countries that rely on the region’s energy, mineral, and food resources? How do the global economic and sociological developments affect the Arctic? What are the opportunities in the Arctic? In Laxenburg last week, a group of experts met to define these questions, and the research needed for policymakers to make sustainable plans for the future of the region. The outcome is a new scenarios initiative that will bring IIASA’s unique international, policy-relevant systems analysis perspective to the future of the Arctic.

The Arctic Scenarios Workshop, jointly hosted by IIASA’s new Arctic Futures Initiative (AFI) and the Adaptation Actions in the Changing Arctic (AACA) project of the Arctic Council, brought together researchers from five of IIASA’s research programs, as well as Arctic experts from Norway, Sweden, Finland, the Russian Federation, the United States, Greenland, and Canada.

“This meeting was an important step forward, in part because of the people it brought together, and in part because of the work that was done to initiate a potential major new research effort,” says IIASA guest researcher Anni Reissell, who came to IIASA to initiate AFI.  During the meeting the participants discussed the potential extension global scenarios for economic development, population, and climate change (the Shared Socioeconomic Pathways or SSPs), to specific scenarios for the Arctic.

Having developed global scenarios for the next round of climate change research, IIASA is well-positioned to provide this expertise.  During the meeting, IIASA Deputy Director Nebojsa Nakicenovic said, “Why are we doing scenarios and what are they good for? My take is that they are the only tools we have to deal with the huge uncertainty about the future.”

The AFI will collaborate closely with the AACA project, providing a connection to regional experts. The AACA project covers three different pilot regions, with many specific regional issues, but also common pressures and questions. For example, the Arctic regions of Scandinavia are far more densely populated than northern Canada, Greenland, or Russia. But in all of these regions, there are groups of people living subsistence lifestyles, who rely on hunting or fishing, while industries such as oil extraction or renewable energy production are likely to grow ever larger.

Meanwhile, connections with the Arctic Council Working Groups and Arctic Council countries’ policymakers will help focus the research on policy-relevant questions. And IIASA experts will bring in expertise on scenario building and policy support, as well as its unique position as an independent, international research center.

The AFI, slated to run for five years, will bring the first holistic systems analysis perspective to the Arctic. The Arctic Futures Initiative will work in close collaboration with the Arctic Council. In a special session for policy on Wednesday 21 May, high-level Arctic policymakers met with IIASA leaders and Arctic experts to plan the next steps for collaboration with the AFI. Ambassador Hannu Halinen, Finnish Senior Arctic Official to the Arctic Council said, “We are working in compartments. The IIASA Arctic Futures Initiative aims for a holistic assessment is needed and very timely.”

The new initiative brings a systems analysis perspective to the future of the Arctic.