Concentrating solar power (CSP) could supply a large fraction of the power supply in a decarbonized energy system, shows a new study of the technology and its potential practical application. 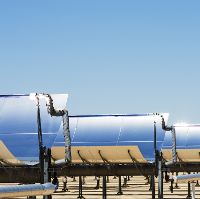 Concentrating solar power (CSP) could supply a substantial amount of current energy demand, according to the study published in the journal Nature Climate Change. In the Mediterranean region, for example, the study shows that a connected CSP system could provide 70-80% of current electricity demand, at no extra cost compared to gas-fired power plants. That percentage is similar to what a standard energy production plant, such as a nuclear plant, can provide.

“Solar energy systems can satisfy much more of our hunger for electricity, at not much more cost than what we currently have,” says Stefan Pfenninger, who led the study while working at IIASA. He is now a Research Postgraduate at the Grantham Institute at Imperial College London.

The study was the first to examine the potential of CSP as a large-scale energy production system, in four regions around the world.

“In order to address climate change we need to greatly expand our use of renewable energy systems,” says IIASA researcher Fabian Wagner, who also worked on the study. “The key question, though, is how much energy renewable systems can actually deliver.”

One problem with deploying solar energy on a large scale is that the sun doesn’t shine all the time. That means that energy must be stored in some way. For photovoltaic (PV) cells, which convert sunlight directly to electricity, this is especially difficult to overcome, because electricity is difficult to store.

Unlike photovoltaic (PV) cells, CSP uses the sun’s energy to heat up a liquid that drives turbines. This means that the collected energy can be stored as heat, and converted to electricity only when needed. But even with CSP, if the sun doesn’t shine for long periods of time, the system may not be able to support large-scale energy needs.

One way to solve this problem is to build a large, connected network of CSP. Until now, however, nobody had explored the details and feasibility of such a plan.  In the new study, the researchers simulated the construction and operation of CSP systems in four regions around the world, taking into account weather variations, plant locations, electricity demand, and costs.

“Our study is the first to look closely at whether it’s possible to build a power system based primarily on solar energy, and still provide reliable electricity to consumers around the clock, every day of the year. We find this to be possible in two world regions, the Mediterranean basin and the Kalahari Desert of Southern Africa,” says study co-author Anthony Patt, Professor of Human-Environment Systems, ETH Zurich Department of Environmental Systems Science, and an IIASA guest research scholar.

Grantham Institute for Climate Change and the Environment