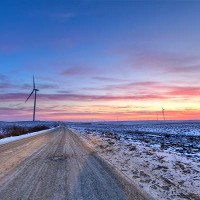 Limiting temperature rise to 2 degree Celsius over pre-industrial levels requires stringent limits to global greenhouse gas emissions. Global carbon dioxide emissions in this case are reduced to zero, shortly after mid-century, according to the 2014 update to the annual UNEP Emissions Gap Report. All greenhouse gases combined (including, for example, methane) would have to reach zero levels by the end of the 21st century if the world attempts to stay within the internationally defined 2 degree Celsius limit. The report also provides technologically and economically feasible pathways of how this can be achieved over time, starting from what countries have already promised to do by 2020.

The report, which is updated every year, builds on the findings of the recent Fifth Assessment Report of the Intergovernmental Panel on Climate Change (IPCC). It also relies in large part on research by IIASA’s Energy program. IIASA researcher Joeri Rogelj was a lead author on Chapter 1 and 2, David McCollum was a lead author for Chapter 2, and Keywan Riahi and Volker Krey served as contributing authors for Chapter 2. 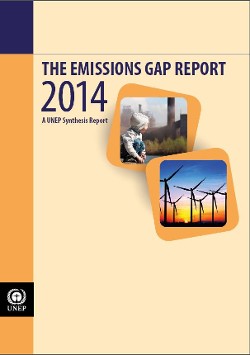 Rogelj also spoke at the launch event on 19 November as part of a panel discussion with stakeholders. He says, “The UNEP Emissions Gap Reports provide a yearly health check for how international climate action is progressing towards achieving its current objective of limiting warming to no more than 2 degree Celsius. This year’s report provides technologically feasible waypoints for global emissions reductions over time and discusses the implications of further delaying stringent mitigation action. These insights are fundamental to inform policymakers during their efforts to define a new global agreement on climate change which continue at the UNFCCC summit in Lima, Peru, and are planned to be finalized by the end of 2015.”

The report also highlights the importance of energy efficiency improvements to reduce fossil fuel use and also reduce air pollution, which contributes to an estimated 7 million premature deaths each year, according to the WHO. A growing body of IIASA research has also highlighted the co-benefits of integrated policies to address climate mitigation and air pollution.