The future of the Arctic

IIASA researchers and Finnish policymakers and scientists met on 16 and 17 May, 2013 to outline a new research agenda addressing the challenges facing the Arctic region. 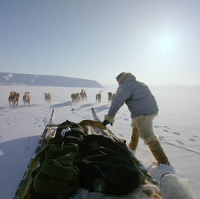 The seminar, jointly organized by IIASA, The Finnish Prime Minister's Office, and the Academy of Finland, brought together stakeholders to share views, discuss and clarify the kind of Arctic research that is most needed to help guide the region through an uncertain future.

Climate change has hit the Arctic region harder than any location on Earth. Over the last 30 years, the sea ice that covers the Arctic Ocean has declined by over 40% in summer, opening up new routes for shipping and making oil extraction and fishing more feasible in previously impassable waters. In the same time period, average temperatures have risen twice as fast in the Arctic as in lower latitudes. The resulting thawing of permafrost can undermine infrastructure, and the climate shifts may disrupt marine and terrestrial ecosystems, as well as the cultures that depend on them.

These changes open up new economic opportunities for resource extraction, shipping, and tourism in Arctic countries, but also pose many new questions about how to guide sustainable economic development and avoid environmental damage.

IIASA researchers focus on many issues relevant to the Arctic, including energy resources, air quality, and fisheries. The Institute also integrates scientific analyses into the assessment of policy options and future scenarios, a function that could be vital in the rapidly changing region, which is becoming ever more important on the global economic and geopolitical stage.

The State Secretary to the Prime Minister Olli-Pekka Heinonen chaired the first session, which included presentations on Arctic strategies by the Finnish Arctic Ambassador and senior representatives of other Arctic nations.  Presentations from other stakeholders from industry and academia were followed by a panel discussion that defined key challenges in the Arctic.  A key conclusion of the meeting was the need for a holistic, integrative assessment of plausible futures for the Arctic, cutting across different disciplines and individual countries’ strategic interests.  A lead role for IIASA was proposed in such an assessment, and suggestions made that the Finnish Government might join with other NMO national representatives to introduce such a proposal for Arctic Council deliberations.

The second day featured further discussions of the Arctic and other challenges facing policy makers at a roundtable on improving the information base of political decision making, hosted by the Prime Minister’s office and featuring in-depth discussions with the State Secretary to the Prime Minister and high level representatives of ten Ministries.  Participants examined the challenges to communication between scientists and policy makers, and established a process for interactions between IIASA and Finnish government agencies.

The meeting was webcast. For more information visit the Academy of Finland Web site: http://www.aka.fi/arctic2013. The conference also included discussion on Twitter: #arcticpolicies.

In September 2012, Arctic sea ice cover declined to a record low, over 3 million square kilometers below the long-term average for the month. 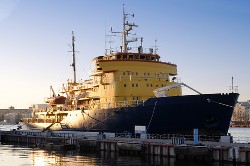 As the Arctic ice cover retreats in summer months, shipping in the region is increasing.

Meeting agenda and information on the Academy of Finland Web site.