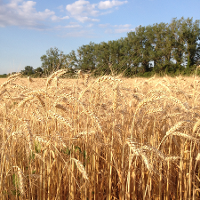 Improving crop yields using sustainable methods could cut greenhouse gas emissions by as much as 12% per calorie produced according to a new study published in the journal Environmental Research Letters. At the same time, these changes could provide more food to people in need.

Agriculture and land use change contributed about 1/3 of total human greenhouse gas emissions in the past decade, through crop cultivation, animal production, and deforestation. By producing more food on less land, it may be possible to reduce these emissions, but this so-called intensification often involves increasing fertilizer use, which can lead to large emissions of nitrogen-containing gases that also contribute to global warming.

“The most efficient way to ensure sustainable intensification on the crop side is to rely on practices and technologies that are not more fertilizer-demanding, such as new varieties, improved rotations, integrated crop-livestock practices, and precision farming,” says IIASA researcher Hugo Valin, who led the study.

The study’s findings particularly apply to developing countries. In many cases farming in these countries is not as efficient as it could be, and so investing in better farming practices could lead to big benefits both in terms of food security and greenhouse gas emissions.

However, says Valin, “Increasing livestock yield is not as beneficial to food security as can be increase crop yield, just because meat and dairy are a small share of diets, especially in developing countries.”

To conduct the study, Valin and colleagues explored scenarios using IIASA’s GLOBIOM model. Scenarios are modeling tools for understanding the links between future policies, actions, costs, and outcomes—in this case, scenarios allow researchers to look at future food production both from crops and livestock, greenhouse gas emissions, and the trade-offs and co-benefits of different pathways of crop yield improvement.

The new study also emphasizes the effects of increased food production on demand. All things being equal, more food availability leads to lower prices and therefore greater demand. That extra demand means that farmers will want to continue expanding, to produce even more food.