A new overview study published in Nature investigates the impacts of meteorological extreme events on the carbon cycles of land ecosystems: a self-reinforcing effect in the wake of climate change cannot be ruled out. 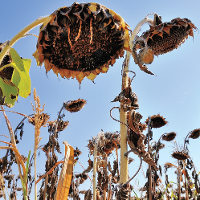 Sunflowers in drought in Italy, Carbo-Extreme

Increasing atmospheric concentrations of carbon dioxide do not only cause global warming, but probably also trigger increased occurrences of extreme weather events such as long-lasting droughts, heat-waves, heavy rainfall events or extreme storms. One of the big unknowns in climate research is the question: how do extreme events of this kind influence regional and global carbon balances. One of the first well-documented large-scale events occurred one decade ago, when a summer heat wave affected Central and Southern Europe in 2003. Investigations of this event suggested that climate extreme events have a much stronger effect on the carbon cycle than previously assumed. Consequently, an international team of researchers led by Markus Reichstein, director at the Max Planck Institute for Biogeochemistry in Jena, Germany, investigated the influence of extreme climate events on the carbon cycle of land ecosystems and if the resulting additional CO2 emissions feedback on climate change. The most relevant results from this work, which has been supported by the European Commissions “CARBO-Extreme” project over the last four years, have now been presented in a Nature paper to a broader scientific community.

One innovation of the research team was to explore the past 30 years from the perspective of the ecosystems (“impact perspective”) at a global scale. With the aid of global Earth observations and data-driven models, the researchers show that on average, extreme events prevent the uptake of around 3 petagrams carbon per year by the vegetation. “This amount is in the order of magnitude of the annual net uptake of carbon by the biosphere of the oceans,” notes Markus Reichstein. In particular, drought periods strongly influence the carbon balance of forests, grasslands and agricultural areas. “We observed that most problems are not caused by heat-waves, but by droughts,” explains Markus Reichstein. The most diverse and long-lasting effects of extreme events are expected to affect forest ecosystems. Marijn Van der Velde, Research Scholar from IIASA who was a co-author, adds that “in croplands, accounting for both immediate and long term adaptive human intervention which strongly modulates the response to extremes – is a real challenge”.

Yet another important result relevant from both a theoretical and practitioner’s perspective is the distribution of extremes in the carbon cycle. Like other phenomena, such as landslides or earthquakes, extremes in the carbon cycle depict a pronounced power-law behavior. This distribution implies that a few large events dominate the total effect, while smaller events are much less relevant globally.

Climate Extremes and the Carbon Cycle

PDF brochure as part of the CARBO- Extreme project.