Gas flaring by the oil industry and smoke from residential burning contributes more black carbon pollution to Arctic than previously thought—potentially speeding the melting of Arctic sea ice and contributing to the fast rate of warming in the region. 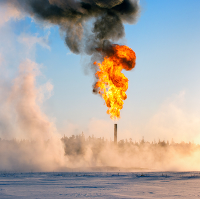 The new study, published in the journal Atmospheric Chemistry and Physics by researchers at IIASA and in Norway, Finland, and Russia, finds that gas flaring from oil extraction in the Arctic accounts for 42% of the black carbon concentrations in the Arctic, with even higher levels during certain times of the year. In the month of March for example, the study showed that flaring accounts for more than half of black carbon concentrations near the surface. Globally, in contrast, gas flaring accounts for only 3% of black carbon emissions.

The researchers also found that residential combustion emissions play a greater role in black carbon pollution than previously estimated, after they incorporated seasonal differences in emissions into the model.

To conduct the study, researchers used particle dispersion model FLEXPART driven by emissions estimated with the IIASA’s GAINS model, combined with measurements of black carbon in the Arctic, made during a research cruise in the Arctic Ocean and research stations located at 6 sites in Alaska, Canada, Finland, Norway, and Greenland.

In the new study, the researchers for the first time included temporal distribution of black carbon emissions from residential combustion. “Understanding how much is emitted when during the year is something that has to be included better in our regional models,” says IIASA researcher Zbigniew Klimont, who worked on the study. It also incorporated detailed regional data on the location of gas flaring emissions, improving upon previous estimates that either ignored them entirely or used only regional averages. These improved emission estimates and their temporal resolution allows for a better reproduction of seasonal variability in observed black carbon concentrations.

“We are seeing more and more oil being extracted further and further north. And the proximity of emissions from gas flaring matters,” says Klimont. Black carbon, or soot, contributes to warming in the Arctic by darkening the surface of snow or ice and causing it to melt faster, or absorbing more heat in the air.

The warming effect of black carbon on ice and snow has been suggested as one factor contributing to the relatively fast warming of the Arctic compared to the rest of the world. Arctic sea ice has declined faster than climate models predict, hitting new record lows in 2007 and 2012. 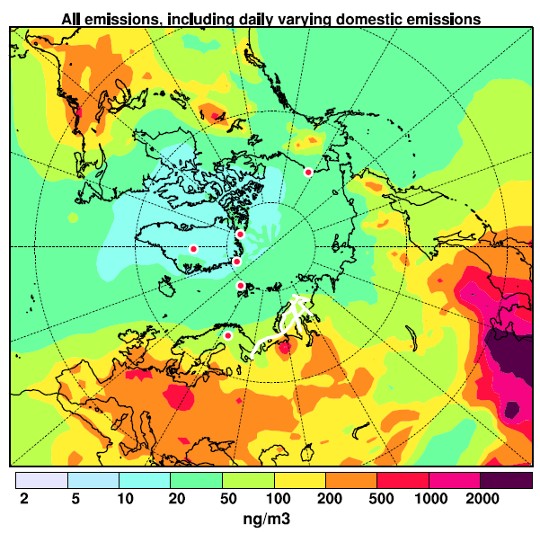 This map shows the surface concentrations of black carbon, from all emission sources, as simulated by the new study. The study shows that residential combustion emissions and gas flaring emissions are higher than previous studies had estimated.

Funding
This study was funded by the FP7 project ECLIPSE , with additional support from the MACEB project.

Evaluating the CLimate and Air Quality ImPacts of Short-livEd Pollutants