Sustainable fishing practices could lead to larger fishing yields in the long run, according to a new study that models in detail how ecology and evolution affect the economics of fishing. 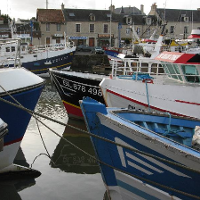 Evolutionary changes induced by fisheries may benefit the fishers, according to a new study published last week in the Proceedings of the National Academy of Sciences. But if fisheries are not well-managed, this potential benefit turns into economic losses, as stocks decline from overfishing and further suffer from evolution.

The bad news is that today very few fisheries are managed in a way that will lead to yield increases in the long term. While these fisheries may not be in danger of collapsing, IIASA Evolution and Ecology Program Leader Ulf Dieckmann says, “There is a big difference between preventing stocks from collapsing and managing them so as to achieve an optimal harvest.”

The new study, led by 2005 IIASA YSSP participant and Peccei Award winner Anna Maria Eikeset, examines Northeast Arctic cod, one of the most commercially important fisheries in the world. It builds on a growing body of work showing that fisheries-induced evolution typically leads to faster growth and earlier maturation.

These evolutionary changes may harm a fishery, since they tend to lead to smaller adult fish and could push the animals to reproduce at too early an age, when they are not yet good at it. On the other hand, the changes can also lead to greater reproduction and hence more fish. But nobody knew how these negative and positive effects balance out economically.

Consequently, to reap these long-term benefits, fisheries managers must first cut back substantially on the amount of fish that are harvested today.

“Harvesting Northeast Arctic cod optimally means taking 50% less fish,” says Dieckmann. “Our model shows that by making this substantial cut and waiting for the stock to rebuild, evolution and natural growth could lead to sustainable yields over 30% greater than today.”