A new study from IIASA population researchers finds a link between men’s and women’s personalities and the likelihood that they will have children. 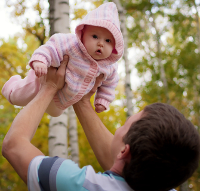 Men with neurotic personality traits are having fewer children compared to previous generations, according to a new study published in the European Journal of Personality. The study examined the effect of personality on how likely a person is to have children, using extensive survey and birth registry data from Norway. It also found that men who are extraverted and open tend to have more children, while women who rank as conscientious on personality tests tend to have fewer children, although these findings were constant across generations.

The study could have important implications for population dynamics at a time when fertility rates across developed countries have fallen to below replacement rates. Personality effects may be one factor contributing to the decline of fertility rates in Europe, says IIASA’s Vegard Skirbekk, who led the study, but they have not previously been studied in detail.  Population changes are an important factor for projecting future changes in sustainability, climate, energy, and food security, IIASA’s core research areas.

In particular, Skirbekk notes the decline in childbearing among neurotic men—neurotic meaning individuals who tend to be moody and emotional. The study found that the effect only applies for men born after 1957. Skirbekk says that the change in these men’s fertility could be due to new norms in having children, for example that couples today wait longer to have children, and couples tend to test each other out more before committing to raising children together.

The study was made possible by Norway’s very detailed birth records and an integrated personality survey, which allowed the researchers to examine the connections between both female and male fertility and personality. “For men, often you don’t know exactly how many children they have because information is not matched in the registries, but for Norway we have very exact information” says Skirbekk.

While the study only considers Norway, Skirbekk says that the findings likely apply more widely. “Norway is a leader country in terms of family dynamics,” says Skirbekk, “Many trends that have been observed first in Norway—increasing cohabitation, divorce rates, and later marriage, for example—have then been observed later in many other parts of the world. Of course it remains to be seen if this phenomenon will also spread.”