As temperatures warm, plants release gases that help form clouds and cool the atmosphere, according to research from IIASA and the University of Helsinki. 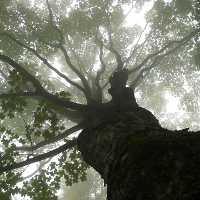 The new study, published in Nature Geoscience, identified a negative feedback loop in which higher temperatures lead to an increase in concentrations of natural aerosols that have a cooling effect on the atmosphere.

“Plants, by reacting to changes in temperature, also moderate these changes,” says IIASA and University of Helsinki researcher Pauli Paasonen, who led the study.

Scientists had known that some aerosols – particles that float in the atmosphere – cool the climate as they reflect sunlight and form cloud droplets, which reflect sunlight efficiently. Aerosol particles come from many sources, including human emissions. But the effect of so-called biogenic aerosol – particulate matter that originates from plants – had been less well understood. Plants release gases that, after atmospheric oxidation, tend to stick to aerosol particles, growing them into the larger-sized particles that reflect sunlight and also serve as the basis for cloud droplets. The new study showed that as temperatures warm and plants consequently release more of these gases, the concentrations of particles active in cloud formation increase.

“Everyone knows the scent of the forest,” says Ari Asmi, University of Helsinki researcher who also worked on the study. “That scent is made up of these gases.” While previous research had predicted the feedback effect, until now nobody had been able to prove its existence except for case studies limited to single sites and short time periods. The new study showed that the effect occurs over the long-term in continental size scales.

The effect of enhanced plant gas emissions on climate is small on a global scale – only countering approximately 1 percent of climate warming, the study suggested. “This does not save us from climate warming,” says Paasonen. However, he says, “Aerosol effects on climate are one of the main uncertainties in climate models. Understanding this mechanism could help us reduce those uncertainties and make the models better.”

The study also showed that the effect was much larger on a regional scale, counteracting possibly up to 30% of warming in more rural, forested areas where anthropogenic emissions of aerosols were much lower in comparison to the natural aerosols. That means that especially in places like Finland, Siberia, and Canada this feedback loop may reduce warming substantially.

The researchers collected data at 11 different sites around the world, measuring the concentrations of aerosol particles in the atmosphere, along with the concentrations of plant gases, the temperature, and reanalysis estimates for the height of the boundary layer, which turned out to be a key variable. The boundary layer refers to the layer of air closest to the Earth, in which gases and particles mix effectively. The height of that layer changes with weather. Paasonen says, “One of the reasons that this phenomenon was not discovered earlier was because these estimates for boundary layer height are very difficult to do. Only recently have the reanalysis estimates been improved to where they can be taken as representative of reality.”

Podcast: Plants and the climate