A new study published in the journal American Naturalist helps explain how spatial variation in natural environments helps spur evolution and give rise to biodiversity. 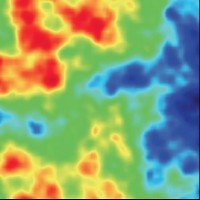 The model represents asexual organisms that reproduce like plants. To investigate how environmental variation affects evolution, Haller modeled an environment with complex spatial structure. “We wanted to look at more realistic environments, with more random variation in environmental conditions from place to place,” says Haller. While simpler than a real-world environment, the resultant model provides a much more realistic basis for studying biodiversity formation than has been possible before.

The study also shows that the scale of landscape variation, in comparison with a species’ dispersal distance, changes how much biodiversity can emerge.

The new work provides a better basis for understanding how biodiversity evolves. While many people laud the idea of preserving biodiversity, says Haller, much remains unknown about what an environment needs in order to maintain or produce biodiversity. “It’s very hard to conserve something that you don’t even understand,” says Haller.

Haller started the work as part of his participation in IIASA’s Young Scientists Summer Program, working with Dieckmann and Mazzucco.

Three views of one run of the model: Left: a complex landscape, generated by a method described in the paper. Center: A population of organisms that have adapted to local conditions in the environment. Right: The evolutionary history of the population depicted in the center panel, with time proceeding from left to right and phenotype shown on the y-axis.

On IIASA's Nexus Blog, Ben Haller explains his new study and why it's important for understanding biodiversity.