Professor Dame Lesley Anne Glover is the President of the Royal Society of Edinburgh and pioneered science advice to policy both nationally and internationally. 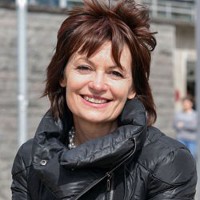 Anne Glover has a BSc in Biochemistry from Edinburgh and a PhD in Molecular Microbiology from Cambridge, UK. She pursued a research career at the University of Aberdeen and studies the diversity and function of microbes in soil, the development of sensors to detect environmental pollution and how we respond to stress, which has particular relevance to how we age. She also led the launch of a spin-out company based on her research.

Anne Glover has played pioneering roles in science advice. Between 2006 and 2011 she was the first Chief Scientific Adviser to the Government of Scotland. She then moved to Brussels serving as the first Chief Scientific Adviser to the President of the European Commission (2012-2014), a role in which she became a champion for scientific evidence in EU policy. Following a sabbatical as a Richard von Weizsaecker Fellow of the Robert Bosch Foundation in Berlin, she then returned to the University of Aberdeen in June 2015 as a Vice Principal for External Affairs and Dean for Europe. In August 2017 she has been elected President of the Royal Society of Edinburgh for the period 2018-2021, succeeding Jocelyn Bell-Burnell. She took up her new post in April 2018. 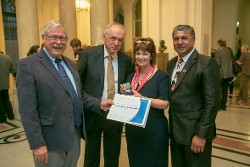 Anne Glover is widely acknowledged as one of the world’s best science communicators, having more than 15,000 followers on Twitter, speaking regularly at major science events around the world, and appearing in radio and TV programs. She is promoting tirelessly the role of women in science, engineering and technology, and supports STEM education in schools. She has visited IIASA while being an EU science advisor and has always been a supporter of IIASA research.

Anne Glover has been awarded many honorary degrees both nationally and internationally and serves on numerous scientific boards. She became a Woman of Outstanding Achievement in Science, Engineering and Technology (SET) in 2008. In 2009, she was awarded a CBE by the Queen in recognition of her services to environmental sciences and in 2015, she became a Dame Commander of the Order of the British Empire (DBE) for services to science in the UK and Europe.

Joint IIASA and Austrian Academy of Sciences Lecture: Why Evidence Matters by Dame Anne Glover of the Royal Society of Edinburgh