On 24 May 2019, Yoichi Kaya, Director General of the Research Institute of Innovative Technology for the Earth (RITE) became a IIASA Distinguished Visiting Fellow. 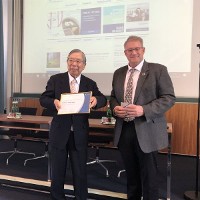 Professor Kaya was awarded this special recognition by IIASA Director General Albert van Jaarsveld. During the ceremony, Nebojsa Nakicenovic, IIASA acting deputy director general, and Arnulf Grubler, IIASA Transition to New Technologies Program director, who have both worked closely with Kaya throughout his career, paid tribute to his work in energy and the environment. This includes his extensive collaborations with IIASA and the IPCC jointly and his development of the “Kaya Identity,” a well-known as an equation for CO2 emissions as the product of carbon intensity, energy intensity and GDP. In receiving the award Professor Kaya thanked IIASA researchers and staff, especially those who had collaborated with him on various projects throughout his career to date. 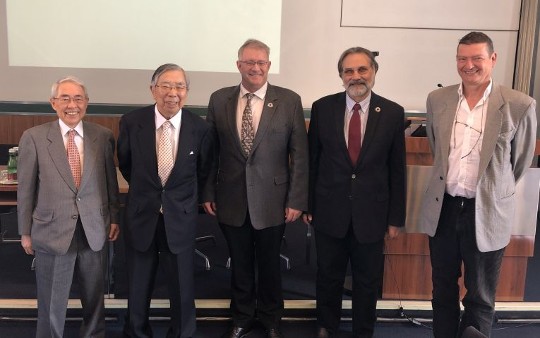 Professor Yoichi Kaya is President of Institute of Innovative Technology for the Earth (RITE) and Professor Emeritus of the University of Tokyo. After graduating from the University of Tokyo, Kaya was a lecturer, an associate professor, and then professor of the Department of Electrical Engineering until 1995 and he was a Professor of Keio University from 1995-2000. Additionally, he was a member of the Club of Rome between 1974 and 1992, chaired the Japan Institute of Electrical Engineering from 1994-1995 and chaired the Japan Society of Energy and Resources from 1995-1998. He was a member of IIASA Council between 1985 and 1995.

The IIASA Distinguished Visiting Fellows Award was established by the IIASA Governing Council in 2013 to recognize the contribution of distinguished scholars to IIASA research. It is awarded to eminent scholars for three years, and Council makes the awards based on the individual’s affinity to system analytic and integrated approaches in science, science-to-policy, policy making or business and for their contribution to IIASA analyses through interaction with its researchers and enrichment of IIASA efforts to address complex problems related to global change. The recipients of the award are encouraged to interact even more with IIASA and when possible visit the Institute to collaborate with our researchers.