1.5 Degrees: Meeting the challenges of the Paris agreement

IIASA co-organizezd an international conference focused on achieving the grand ambitions set out in the Paris climate agreement in 2015. 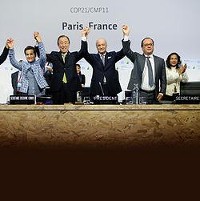 The 1.5 Degrees Conference brought together researchers, policymakers, business leaders, and members of civil society to understand the impacts of warming of 1.5 °C above pre-industrial levels and assess the feasibility of meeting the challenges in the Paris Climate Agreement. The conference reviewed the arguments behind the 1.5 degrees goal and sought to understand how the goal is to be interpreted. It explored the options for how a 1.5 degrees target could be achieved and evaluate the possible consequences of the goal from a wide range of perspectives.

20 September 2016
PUBLIC LECTURE: The Paris climate deal: origins, ambitions and implications
Launching the 1.5 Degrees International Conference, the University of Oxford is proud to present a special evening of keynote speeches and discussion from some of the key figures behind the historic Paris Climate Agreement, including Laurence Tubiana, French Ambassador for climate negotiations, Tony de Brum, the force behind the High Ambition Coalition, Nebojsa Nakicenovic, IIASA and IPCC scientist, and Janos Pasztor, Senior Advisor to the UN Secretary-General on Climate Change.

IIASA researcher Brian Walsh will present research on the potential of algae as feedstock as a negative emissions technology.

IIASA research on the 1.5 degree target

Individual country pledges to reduce greenhouse gas emissions would need to be strengthened in order to limit future climate change to well below the 2°C limit included in the Paris climate agreement, according to a new assessment. More

An average global temperature rise of 1.5°C or 2°C over the coming century would have substantially different impacts on the planet, according to a new study. More