The GGI-SD documents the results of greenhouse gas emission scenarios created using the IIASA Integrated Assessment Modeling Framework (IAMF). Climate change is perhaps one of the most challenging issues to be addressed by interdisciplinary research and by policy measures to date. How will human drivers ranging from the realm of demographics, economics, and technology to social behavior and institutions shape future emissions of greenhouse gases (GHGs)? Are there ways of “bending down” the curve of ever increasing radiative forcing? What will be the consequences of radiative forcing change on global, regional, as well as local climates both in terms of changes in magnitude (e.g., warming, precipitation) as well as in nature (most prominently variability and possibilities of extreme events)? What will be the impacts on natural and human systems of a changing climate? Finally, what are the feasibilities, costs, and benefits (in terms of avoided impacts) of response strategies? These are some of the questions that the GGI scenarios are aiming to address.

GGI-SD is the result of the work of IIASA researchers from diverse interdisciplinary fields such as demographics, technology, energy, agricultural, and forest systems who in 2006 established an IIASA-wide integrated research effort called the Greenhouse Gas Initiative (GGI).

The GGI scenario approach is based on coupling detailed models of energy and industrial systems, agriculture, and forests, which are the main emitters of GHGs, and establishing key targets to implement response strategies. Within the IA modeling framework, consistency of land-cover changes (urban areas, primary cropland, and forest areas) is achieved through the exchange of spatially explicit information between the agricultural model (AEZ–BLS) and the forest management model (DIMA) (now renamed G4M), which are linked to the MESSAGE energy system model.

The results of this research are available in the GGI-SD and published in a Special Issue of Technological Change and Forecasting.

The database includes three "baseline" scenarios of different socioeconomic and technological developments that are assumed to include no explicit climate policies. In terms of socioeconomic inputs, the resulting GHG emissions, and the magnitude of future climate change, these scenarios are classified as high (A2r), low (B1), and intermediary (B2).

A range of climate stabilization targets are imposed on these baseline scenarios to examine the response in terms of GHG emissions and resulting climate change. The framework covers all GHG-emitting sectors, including agriculture, forestry, energy, and industrial sources for a full basket of GHGs, including CO2, Methane (CH4), Nitrous Oxide (N2O) and fluorinated gases (HFCs, SF6, CF4).

The GGI-SD is available online at IIASA and can be entered through any of the tabs indicating different aggregations of data—"Regions," "Sectors," "Series," and "Countries." The resulting data can also be queried, and both numerical and graphical data can be output. 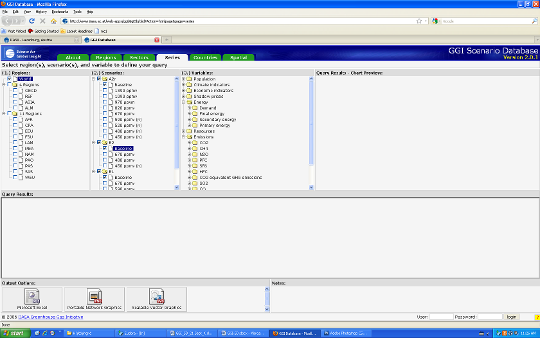 There are three major challenges involved in gaining greater knowledge with less uncertainty about the possible magnitude and nature of climate change:

These challenges can best be addressed by pooling efforts across disciplines and research organizations to gain deeper knowledge of the multiple interacting aspects of climate change. Only on this basis can effective response strategies be crafted.