The evolutionary consequences of fishing affect a host of heritable traits in fish populations, and IIASA researchers are developing a toolkit to allow scientists to assess these impacts. 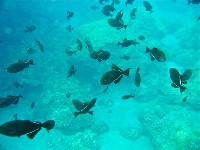 For more than a decade, IIASA researchers have recognized that the natural pace of Darwinian evolution was being accelerated in oceans and lakes by large-scale commercial fishing operations and individual anglers. The harvest mortality among fish sometimes exceeds natural mortality by a factor of four, triggering adaptive responses in fish populations known as fisheries-induced evolution.

This evolutionary dimension of harvesting is receiving significant attention, especially in the context of fisheries. IIASA’s research has strongly contributed to the growing global agenda in this field. The research has revealed that many heritable features are likely to be affected in a harvested population, including maturation schedules, growth rates, reproductive investment, behavior, and morphology. As a result, harvest-induced evolution may change a population’s yield, stability, and recovery potential.

IIASA’s Evolution and Ecology Program is developing scientific tools to help a new generation of researchers understand and cope with the opportunities and threats of harvest-induced evolution. When completed, these tools will allow researchers to use an evolutionary impact assessment to analyze the evolutionary consequences of harvesting and the merits of alternative management strategies. This project is striving to make one or more of these tools available online, in the form of web-based services facilitating stakeholder involvement.